I’m pleased to welcome Alison Morton to the blog to talk about her revision process. 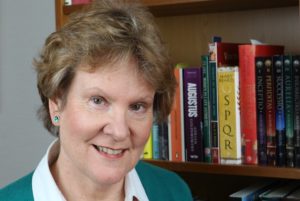 The first five books have been awarded the BRAG Medallion. SUCCESSIO, AURELIA and INSURRECTIO were selected as Historical Novel Society’s Indie Editor’s Choices.  AURELIA was a finalist in the 2016 HNS Indie Award. The sixth, RETALIO, is out on 27 April 2017.A ‘Roman nut’ since age 11, Alison has misspent decades clambering over Roman sites throughout Europe. She holds a MA History, blogs about Romans and writing.

A ‘Roman nut’ since age 11, Alison has misspent decades clambering over Roman sites throughout Europe. She holds a MA History, blogs about Romans and writing.

Now she continues to write, cultivates a Roman herb garden and drinks wine in France with her husband of 30 years.

You can read her First Draft Q&A Here.

Not too bad. The story has reached its resolution, the characters are generally where they should be. But I have a secret weapon for the drafting stage – my time grid. Timing is crucial in crime, thrillers, espionage and adventure novels because there are often only tiny windows for actions and you have to know who said what to whom and when. I jot down the main actions or events in my time grid every time I write a scene or chapter and so create an index to my book including a column for timings.  It’s not sophisticated, but it stops me losing the plot!

Send the manuscript to my Kindle. I read through uninterrupted except to satisfy stomach cravings and to take comfort breaks. I need to see if the story has legs. Does it work? Does it hang together? I try as hard as possible to ignore the minor things wrong with it. We’re looking at a rough diamond hacked out of the rock face. 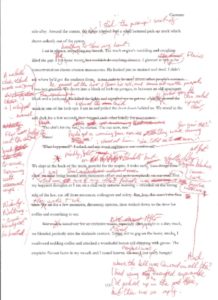 Next, I print out the draft in one-and-a-half spacing. With continuous cups of strong tea, my index grid to one side and my red pen in my hand, I work through the manuscript, eliminating beasties and generally wreaking havoc. When I started writing, I drew up a list of twelve steps and I still follow it today.

Do you allow anyone to read that very first draft before revisions or can you assess it objectively yourself?
My critique partner is the first person to read the new story and then only after I’ve carried out the first self-edit. After her (inevitable) revisions, it goes to a (very tough) structural editor. After further revisions, a copy editor tidies it all up then the finished manuscript ends up on my Kindle. And I still find things…  My first draft isn’t terrible, but all these eyes on it are essential to spot bloopers, and tighten and strengthen. Thankfully, the latest, RETALIO, which came out yesterday, needed little story revision, just the usual flat bits and pieces to remedy.

After making sure the plot works, flat writing. Sometimes, I may have hurried something, quickly describing it instead of making a proper scene. I may have used unexciting or weak words, nouns instead of verbs or not prolonged the suspense in a scene enough. The book has to be alive, vibrant even if it’s to drag the reader into the heart of its world.

Not particularly. I usually leave my office desk, decamp to the dining room and spread the printout, index, rough paper for notes and my laptop out over the table.

On the read-throughs, the Kindle, but the heavy lifting of revisions is always on paper. You get yet another chance to revise when you enter your paper amendments into the file on your computer.

Not too bad due to the index grid. If the flow of the story needs revising, I can usually do it from that, then apply to the manuscript. No decimation yet!

The only big change, but I made it at the drafting stage, was to my second book, PERFIDITAS. It was on the first Kindle read-through. The ending was okay, but not strong so I axed the last 30,000 words and rewrote the last third. The new draft was SO much better; tighter emotional conflict as well as well grittier action scenes and a tension-laden (instead of “okay”) climax. You have to take your courage in your hands and just do it. The axed part is locked away in my system – never delete any writing – and I might use it elsewhere…

When first drafting, many writers keep track of progress by counting words in a day. How do you make sure you’re progressing as you’re revising?
When revising, I don’t count words; I just plough through it. That’s my main work that week and nothing else gets done.

Give me revision every time! Although it’s wonderful to see the story, the characters and the book’s world rolling out on to the screen, sometimes they have to be wrenched out of your mind almost by brute force. Once you have a completed manuscript, you then have something to subjugate, polish and hone.

It takes ages! By the time my critique partner and the two editors have pored over it and I’ve had several read-throughs it can be weeks and weeks. This is the burden of the perfectionist! Now RETALIO is out, I’m confident it’s the very best it can be because of all the teamwork behind it.

Thanks for taking the time to answer my questions! 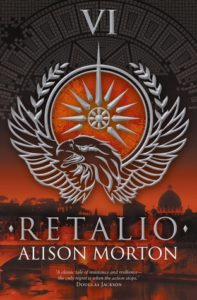 Early 1980s Vienna. Recovering from a near fatal shooting, Aurelia Mitela, ex-Praetorian and former foreign minister of Roma Nova, chafes at her enforced exile. She barely escaped from her nemesis, the charming and amoral Caius Tellus who grabbed power in Roma Nova, the only part of the Roman Empire to survive into the twentieth century.

Aurelia’s duty and passion fire her determination to take back her homeland and liberate its people. But Caius’s manipulations have isolated her from her fellow exiles, leaving her ostracised, powerless and vulnerable. But without their trust and support Aurelia knows she will never see Roma Nova again.