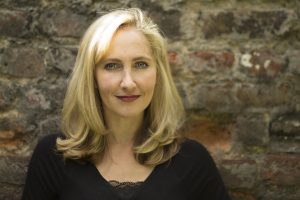 I’m thrilled to have historical crime author, Anna Mazzola on the blog today to talk about her first draft process.

Anna is a writer of historical crime fiction. Her acclaimed debut novel, The Unseeing, published in July 2016, is based on the life of a real woman called Sarah Gale who was convicted of aiding a murder in London in 1837.

Anna has also written and published several short stories. Her second novel, about a collector of folklore on 19th century Skye, will be published in Spring 2018.

It starts with theme – with an idea that interests me. For my first novel, The Unseeing, it was a criminal case I came across and, specifically, the silence that the woman maintained throughout the trial. For my second novel, it was the idea of a dark fairytale. For my third novel, I know I want to write something about xenophobia and resistance to cultural change so I’m researching around that now.

I write historical crime, so it starts with research: with reading broadly to try to work out exactly what it is I’m going to write about. Then I sketch out a plot and set down the questions I need to answer in order to write the book. Then, finally, I begin to write.

Straight to keyboard and, specifically, to Scrivener, which is a really useful writing app. I do occasionally write in a notebook with pen and paper when I’m out and about, but generally it all goes from brain to Mac.

Because I write historical fiction, research is vital. I have to understand the era in which I’m writing or the story won’t make sense or feel authentic. That said, I think it’s important not to get too hung up on the research, or I would never get the darn book written. I have to remind myself that I’m not a historian or a biographer. People want the history to be accurate, of course, but they read my books for the story.

I read broadly at the beginning: accounts of the era in which I’m writing, other fiction set at that time. Then I map out the plot and work out which specific things I need to research in order to write the book. Once I’m writing, I try to immerse myself in the time and place: reading memoirs, traveller accounts, newspapers, fiction from the time, looking at maps and photos and plans and pictures, visiting the places where the novel is set. That’s why I’m dragging my family to the Isle of Skye next week, when they’d probably rather be going somewhere warm!

I wish I had a better system for storing ideas and research. I tend to email things to myself, or to store them in Word documents, or directly in Scrivener. But I’m sure there’s a far better way.

As I mentioned above, it starts with broad research, broad plot, then narrower research. Once I’m writing, I’m noting down further things I need to look up, but I try not to get too bogged down in research or I may never resurface. It’s been a very different process for my two books, because I wrote most of my first novel, The Unseeing, while I was working and while I was doing a writing course, so it was a very slow and cautious process. With my second novel, I’ve had more time during the day in which to write, but have been up against a deadline because I signed a two-book deal. I’ve therefore focused mainly on just getting the first draft finished, so that I have something to work with – the raw material. 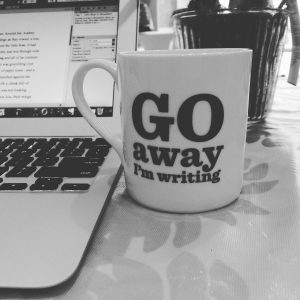 I am slightly obsessive about ‘to do’ lists, which I update every day. I also have a ‘GO AWAY I’M WRITING’ mug, which reminds me I’m supposed to be writing, not pissing about on Twitter. The mug must contain coffee, or no writing will be done.

Unfortunately, the outside world exists rather too much, most often in the form of a small child coming to find me in my writing room, or in the form of emails and social media messages.

I do still become subsumed by the story world, however – often dreaming about it. My second book is set in 19thcentury Scotland, and I’ve found myself eating rather a lot of porridge.

These days I do most of my writing in what my dad refers to as ‘The Turret’, aka my bedroom. The Turret is at the top of the house and as far away as I can get from those small people who keep following me about. You’ll see from the photograph, however, that George the cat has discovered my hideout and decided that my writing chair is his chair. Often, we have to share it.

I like to keep images of what I’m writing about on my desk, so at the moment there are pictures of 19th century Skye and of the house on which my fictional mansion is based. Beside my desk are a pile of books that I dip into when I need to check things, and a map of Skye, which I’ve scribbled over.

I try not to get bogged down on restructuring and editing on the first draft, but I can’t help doing some editing as I go. Whenever I start writing, I always read back and do a cursory edit of what I’ve written in the previous session. The big edits come later, however.

When I’m on a first draft, I try to do 2,000 words a day, but it isn’t always possible. I know some people write in scenes, or just whenever the mood takes them, but I have to be quite regimented about it because I only have a few hours four days a week to get the draft done.

The first draft of book 2 took about 5 months. It was dreadful. I’ve done two further drafts, all in all taking me about a year, not including research. It’s still dreadful. Ask me again in a couple of months! 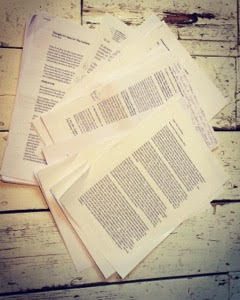 I do an initial read and correct from Scrivener, then print it out and go through it by hand. I find it helps to read the manuscript out loud, to hear the rhythm and find out where things aren’t working.

First, celebration. You have to congratulate yourself on each step of the way, as no one else will. Second, reading it through and realising how bad it is. Third, working out what I have to do to write the next draft, including a restructuring plan and a research list. Then, getting more coffee, telling myself I can do it, and beginning all over again.

Thanks for having me on the blog! 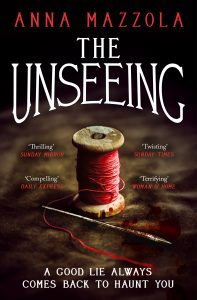 Set in London in 1837, Anna Mazzola’s THE UNSEEING is the story of Sarah Gale, a seamstress and mother, sentenced to hang for her role in the murder of Hannah Brown on the eve of her wedding. Perfect for any reader of Sarah Waters or Antonia Hodgson.

After Sarah petitions for mercy, Edmund Fleetwood is appointed to investigate and consider whether justice has been done. Idealistic, but struggling with his own demons, Edmund is determined to seek out the truth. Yet Sarah refuses to help him, neither lying nor adding anything to the evidence gathered in court. Edmund knows she’s hiding something, but needs to discover just why she’s maintaining her silence. For how can it be that someone would willingly go to their own death?