Today we have a guest post from crime author Dave Sivers on launch day of his new book. So happy publication day Dave! 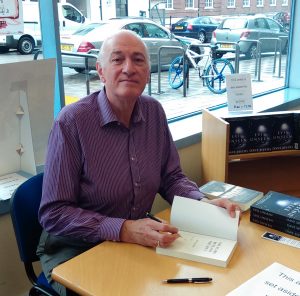 Dave’s civil service career took him to exotic places like Rhode Island USA, Cyprus, Brussels, Northern Norway and Sutton Coldfield. Along the way, he moonlighted variously as nightclub bouncer, bookie’s clerk and freelance writer, as well as picking up a first class honours degree from the Open University.

Writing has always been his passion and, since giving up the day job, he has launched a second career as a novelist.

The Scars Beneath the Soul, the first book in his popular Archer and Baines crime series – set in Buckinghamshire’s Aylesbury Vale – and the follow-up, Dead in Deep Water, both hit the top three in Kindle’s ‘Serial Killers’ chart. The Blood That Binds is the fourth in the series featuring DI Lizzie Archer and DS Dan Baines.

Dave has also won prizes and publication with his short fiction, written for newspapers and magazines, and writes material for the amateur stage.

If you’re an author – whether traditionally published by one of the big publishing houses, or by one of the smaller publishers, or an Indie author like me, you won’t be going it totally alone. And the chances are that part of your creative process will involve ‘beta readers’.

I’ve been an Indie for about five and a half years now, and in that time I’ve seen a lot of initial hostility to digital self-publishing turn to genuine respect for those Indies who are professional in their approach, only do themselves what they know they have the skills for, and buy in those skills they lack from professionals who know what they’re doing. So, for example, I have one of the best cover designers in the business and an eagle-eyed editor/proof reader.

But there are other members of my team who make just as vital a contribution as those hired professionals, and they are my beta readers.

So what is a beta reader? There’s no ‘official’ definition, but I like a  2014 new word suggestion to Collins English Dictionary:

‘Someone who reads a book checking for more abstract elements such as continuity; plot development; characters rather than spelling or grammar as a proofreader would’.

That’s exactly what I need. These are the first people who see my book, usually when I’ve reached the point where the manuscript is howling out for some fresh sets of eyes. Spelling and grammar can come much later when the story itself is more settled.

I’m not looking for someone to pat me on the head and say it’s nice (although I do like to know what works really well). What I’m really after is the cold, hard, no punches pulled opinions on whether the plot works, whether it’s plausible, whether the pace is right, whether the characters are three-dimensional and consistent, and whether the setting comes to life.

Every single time I send one of my babies out into the world – whether it’s to my beta readers, my editor, a reviewer, or the reading public – I still do it with my heart in my mouth. Most writers will tell you the same. But all writers need to grow a tough skin, or we’d spend half our lives sobbing in the corner.

I have two regular beta readers who I can absolutely depend on to give it to me straight, and they’re happy to look at the manuscript again after I’ve worked on it and give me more feedback. The truth often hurts, but I’d rather hear it at this stage. Often they tell me things I actually knew, but couldn’t see. Only very rarely do I decide not to take a particular suggestion on board but, even then, I make damn sure I know why I made that decision and that I’m willing to stand by it.

The beta-reading process is a real sanity check. It challenges me, through as many iterations as it takes, to look at my work through someone else’s eyes at that section where the pace drags, or that other section that really belongs later in the plot. It means that, by the time it goes to my editor, it’s in much better shape than it would be if I was left to my own devices – and I feel confident that my baby will be able to fly.

Everyone’s heard of editors. Beta readers not so much. But for me, they are the unsung heroes of book publishing. I’ll be raising a glass to mine at my launch party today.

The Blood That Binds 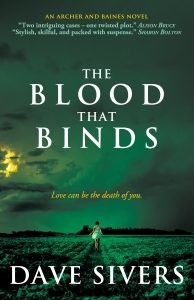 SOMETIMES THE PAST IS BEST LEFT ALONE

The quiet Buckinghamshire village of Houghton is reeling. Soon after twelve year old Leanne Richards is killed by a hit and run driver, the two classmates who were with her that night disappear, one by one.

Jade and Becky said they couldn’t identify the car or the driver. Does someone want to make sure it stays that way? Or are other, darker motives in play?

As DI Lizzie Archer and DS Dan Baines search for the truth, buried pasts and secret loves begin to reveal themselves. But is time running out for the girls? Or is it already too late?