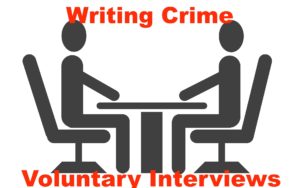 We’ve previously discussed the matter of arresting a suspect for an offence (of murder) and interviewing them, but there is another option, and that is the voluntary interview.

I have in the past been asked the following question;

Circumstantial evidence to arrest – what can this be as little as? I get confused. At one point I don’t think I have enough to arrest (because I’m bringing evidence in dribs and drabs to make it more pacy and to allow for procedures, plus time to gather)

This is the perfect scenario for a voluntary interview if you want to interview, if you want to find out where your suspect was at the time of the offence, etc. but you don’t have enough in the way of evidence. For an arrest you need reasonable grounds and they are reasonable grounds that any person would find reasonable, so you can easily figure that one out. The fact that this writer is calling it circumstantial tells us enough.

So, what is the difference between an arrest interview and a voluntary interview, you ask?

Not a lot – as far as the process goes.

You still caution the person, give them their entitlement to free and independent legal advice and record the interview. But, you tell them they are not under arrest and are free to leave at any time. And they are. You have to let them get up and leave. This could work well for your story, they could be nice and compliant or actually get up and walk out.

And, this is the interesting part. You can also do a voluntary interview for people where you have the evidence, but it’s not felt an arrest in necessary for a prompt investigation. This necessity test is being looked at more and more nowadays. Historical cases are often interviewed under voluntary interviews because there is no necessity for the arrest for a prompt investigation and no concerns of losing evidence.

If your offender for this kind of voluntary interview tries to walk out, I’d suggest you do arrest them, because you have reasonable grounds that without the arrest, you won’t be able to question them. You tried the easy and civil way but they changed things.

And just because the interview has been done on a voluntary basis, don’t think you can’t charge your offender when the time comes, because you can. This process doesn’t stop or change anything. It’s simply a different way of interviewing.

If you’re interested in how the interview looks from the solicitor’s point of view, there is a great Writing Crime post from crime author Neil White who is also a lawyer, right Here.