Today I’m pleased to welcome friend and horror writer, Nic Parker to the blog to talk about her first draft process. 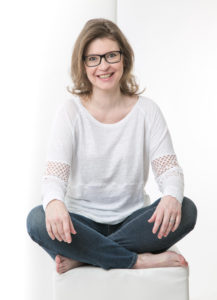 Nic was born in 1971. Her love for the horror genre flourished in early childhood. She enjoyed the opulence of genre productions in the eighties, chasing after forbidden video nasties with friends, and reading mainly Clive Barker and Stephen King.

Since her twenties she’s had the pleasure of meeting and interviewing many household names from the horror genre in her role as a journalist for Moviestar magazine.

She is an avid book collector, passionate about art and likes to try out new recipes from her many cookbooks.

Parker lives in rural Germany with her husband and six cats.

‘Descent to Hell’ is the first part in the Hell trilogy with main character Charlie Ward.

Normally, I chew the idea around a bit in my brain and when over the next days I see a whole book emerge I sit down and begin.

No, if I have free days I can get up in the morning and write for almost a full day for a few days, pausing only to get food and to go to the litter box. We’ve been busy with refurbishing the house lately and I am working part-time so usually I can steal away time to write on the couch in the evening, in the kitchen watching the cake, etc. I can even write waiting at the airport.

I kind of always want to make notes but have never come around to start doing this. I have the idea, sit down and start to write. 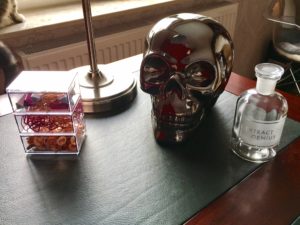 Very important. No matter what you write about, be it ingredients of a poison, a certain disease or weapons, places, etc. – research is important and information is often so easy to come by these days that there is no excuse not to check it out. That’s probably the journalist in me talking otherwise I’d feel like a crook. Having said that my research for Descent to Hell was probably five minutes, it’s so cool to discard any rules and make up your own when you write about a place like hell.

I couldn’t be bothered to read ten books on the life of pilgrims in the 1780s in Poland or something, so I am trying to move around complicated backgrounds and write more about things and places I already know a bit about and research the rest online or try to find an expert who can enlighten me regarding a subject.

I have most of the story outlined in my head and so I sit down and start bringing it onto the page chapter by chapter. If I am stuck I might leave it be for days or weeks. I can’t sit down each day breaking my brain to continue if I can’t think of anything and if I relax the answer to a dilemma usually comes to me in a matter of days. 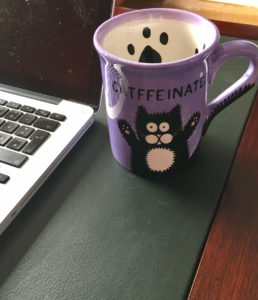 I may get the occasional cup of coffee but other than that I just need my laptop and that’s basically it.

I’ve experienced total loss of time, I sit down to write at noon and in what seems as a matter of minutes the door opens and my husband comes home – almost six hours later, so I guess I get lost within the words while writing.

An antique-style broad desk with my laptop on it and more or less necessary dust gatherers. There is also a small blanket functioning as a cat trap, luring the cat(s) to snuggle on it rather than repeatedly walking over the keyboard. 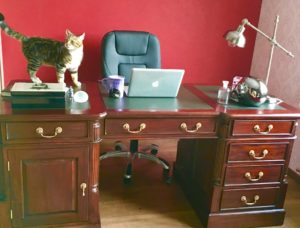 First draft goes without any edits, except when I see misspellings.

Actually none. I sit down and write as long as ideas are pouring out. If I start staring at the screen I’ll stop.

The shape is pretty much the final structure to which things are being added over time or also deleted. But the story itself and the characters usually remain.

If I’ve had additional ideas during writing I get right back to the beginning and start filling them in. Usually, though, I just leave it be for at least a week and try not to think about it and then ideas come sprouting all by their own. I try not to obsess about the manuscript, going at it like a terrier over and over again, but let it rest, editing it gradually.

You can find Nic on her blog | Facebook | Amazon 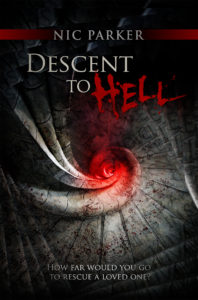 A man forced to enter mankind’s most feared territory … a child dragged into the underworld!
When Charlie Ward’s beloved niece is kidnapped by an atrocious demon he has to find the secret gateway into the one place every human wants to stay away from: Hell!
Armed only with courage and determination Charlie has to survive in a forbidding place filled with despair and anguish. He must face challenges no mortal should ever have to undergo that threaten to destroy his very soul.