Watch Me by Angela Clarke 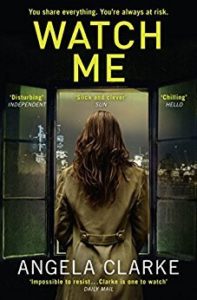 This is my last ‘Recently Read’ post. The reason it has taken so long to put up is that I was lucky enough to receive an advance copy quite a while ago but the book isn’t released until 12th January so I had to sit on my excited little mits and wait to shout about how great it was until closer to release date. But don’t worry, you will soon be able to join me in my excitement.

It’s funny, I keep seeing the news that a new Social Media Murders book is coming out and I get all giddy, then realise it’s the one I’ve already read!

Yes, it’s that good. Nas and Freddie are back! You can see my thoughts on the first book in the series, Follow Me, Here.

You are thrown right into the action and from there on in it never lets up. You are only given a moment to breathe as relationships and personalities are explored, but these are done in such a way that you still don’t want to put the book down. You want to know about Freddie, about how she is, about their friendship and about Nas’s relationships within her workplace, especially with a colleague’s sister missing.  This was all so beautifully done that by the end of the book I was actually in tears. It is so much more than just a thriller, the detail paid to the people involved is captivating.

Everything is so tautly written that no matter what is happening on the page you just have to keep reading.

The use of social media as a weapon is a fascinating one. We all use it in our daily lives, we already see the pain it can inflict with the power of public shaming and trolls, it’s only too easy to step into and be swept away by the world Clarke has created.

This is a thriller for the modern world that encompasses real people with real emotions. A pure joy to read and I for one can’t wait for the next one.