Today I am really thrilled to welcome in the Revision Process series with crime writer, Marnie Riches answering the questions on her process. From today I have a whole host of great content lined up for you. All booked in. This is the start of the series, so come back every Friday to see how writers approach the next stage of writing their books. You can find Marnie’s First Draft Q&A HERE.

Now I hand over to Marnie.

Having authored the first six books of HarperCollins Children’s Time-Hunters series, her award-winning, best-selling George McKenzie crime thrillers for adults were inspired, in part, by her own youth and time spent in The Netherlands as a student. She also writes contemporary women’s fiction.

Your first daft has been completed, what state is it generally in?

My first draft is generally in pretty good shape. I work to tight deadlines and produce two books per year, so I can’t afford to turn anything in that isn’t almost publishing-ready. It definitely helps that I have the plot/my synopsis approved in advance by the editorial team at Avon before I even start writing, so I know what my beginning, middle and end should be!

I have a glass of wine and take the rest of the day or perhaps even the week off, depending on how close the deadline is. I think I need to have a rest between finishing writing and starting to read through. Usually, there is a pile of ironing needs to be done and boring admin too. It’s quite nice to get out of my typing chair and do some exercise after months of sitting! But the celebratory vino comes first…

I try to read the new manuscript as a reader to see if I find the story entertaining and well written. Where it sucks, I tweak. If it needs a machete taking to it, I do it. I find this easy, as it’s often months and months since I read the beginning. It usually feels fresh to me!

The only reader I have apart from my editor is my agent. I’ll let him see things in their draft zero format – i.e. scruffy as hell – as I’m unembarrassed to let him see my writing, warts and all. But I don’t usually seek his approval before revisions. If I’m on a tight deadline, I just get on and do them myself and then send the manuscript out – first to him and then to my editor.

I go through the manuscript carefully to delete any repetition and do away with clumsy turns of phrase. In my last manuscript, I think I had 350 “eyes” and 390 “looked”. I went through and either gouged those eyes out or looked for alternative words! Where there are plot holes, I’ll fill them. If a character needs fleshing out, I’ll do it then. I sometimes replot the book after it has been written to ensure the high points are in the right place. I always check pace. If it drags, I cut mercilessly.

Moaning, mainly! I hate editing. I floss at my laptop a lot. I drink too much redbush tea. That’s it, really.

Computer. I don’t write anything but research notes and plot ideas on paper.

I repair areas. I do my best as I’m writing to ensure there are as few weak spots as possible in that draft zero. This makes for a better quality first draft and saves time later.

Revision, in terms of getting a good first draft together, is tidying. The real editing comes into play when my editor gets involved. She’ll suggest structural changes, perhaps, where something isn’t working quite so well or where she thinks there’s overcrowding in the plot or among the cast of characters. More often than not, though, structural edits for me involve cutting 5K-10K words from the manuscript. I do that and then, voila! It’s generally cleaner and reads better.

I chopped and changed The Girl Who Wouldn’t Die around a lot because I had the luxury of time and because I got so much differing feedback from a variety of people when I was trying to find an agent to represent it. It grew to 150K words and shrank back to 100K, losing several characters, red-herrings and sub-plots. Now, however, having written about 16 novels – of which 6 children’s books, four George McKenzie thriller and one novel from my new Manchester crime series have been published or are about to be published – I tend to write more confidently. I know my story before my fingers hit the keyboard, thanks to the process of writing a synopsis and having it approved beforehand, so there’s less brutal overhauling needed at the end.

I don’t! I simply see how many days I’ve got until my deadline falls and I make sure I hit that deadline. I know I can edit 50-100 pages per day carefully, depending on how slipshod or polished the prose is, so that’s generally a four day process on something that’s been carefully written. I’ll want to read through again after that to check grammar and syntax.

First draft wins, every time, though the revision is where I put the clever stuff in, like red herrings and foreshadowing! Once I get into the swing of writing a first draft, it becomes a compulsion. Actually, that’s a lie. Sometimes, I’m so damned tired and stuck and thick-headed, it’s like pulling teeth! But I can’t abide editing, even though it makes for a much better manuscript.

Coffee at the start of the day. Redbush tea during the day. Gin or wine after dinner. When I’m going full throttle, my working day starts at 8am and doesn’t end until about 10.30pm. I work 7 days per week and just take time out to look after my kids and keep us fed!

Revision takes one to two weeks, depending on the speed at which I need to work. By the time it’s ready to ping over to my agent and editor, the manuscript is as clean as I can possibly get it!

You can find Marnie in the following places: Facebook | Amazon | Kobo

The Girl Who Had No Fear 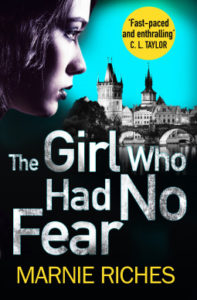 Amsterdam: a city where sex sells and drugs come easy. Four dead bodies have been pulled from the canals – and that number’s rising fast. Is a serial killer on the loose? Or are young clubbers falling prey to a lethal batch of crystal meth?
Chief Inspector Van den Bergen calls on criminologist Georgina McKenzie to help him solve this mystery. George goes deep undercover among the violent gangs of Central America. Working for the vicious head of a Mexican cartel, she must risk her own life to find the truth. With murder everywhere she turns, can George get people to talk before she is silenced for good?
A pulse-pounding race against time, perfect for fans of Stieg Larsson and Jo Nesbo.