When I closed the first draft series down I said that I’d still post the Q&As from authors if I could get them, but they’d have to be slotted in on other days as the Friday slot was now allocated to the Revisions process series. Unfortunately, I haven’t got that up and running as quickly as I’d have liked so I can put this First Draft Q&A in here. Hopefully, next week will see the start of the Revisions series as I’ve now got my act in order. It promises to be good. 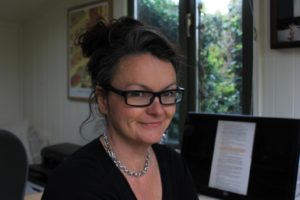 But, today, I have the utmost pleasure in welcoming crime author, Julia Crouch to the first draft hot seat.

Julia hasn’t always been a novelist. She started out as a theatre director and playwright. From there she retrained as a graphic designer before finally completing an OU course in Creative Writing, which nurtured her dark side. Through NaNoWriMo Julia found long form writing in novels and hasn’t looked back, publishing Cuckoo, Every Vow You Break, Tarnished and The Long Fall with her fifth novel, Her Husband’s Lover, due out in January.

Visit the place I’m thinking of setting it in – get a feel for the area, think of my characters inhabiting it. I take a lot of notes about the sense aspects – smells, sounds, things you can’t get just by looking it up on the internet. This visit may happen years before the project starts properly. I’m a great believer in allowing things to brew.

No. Some of my books have been written out of the blue, others planned out beforehand. Increasingly, though, I plan, because I am tied to deadlines, and it’s less scary that way: even if I don’t stick to it, at least there is a piste to go way off.

I keep a notebook, but rarely refer to it – once it’s written down, it’s committed to memory. However, all my actual writing is done on the keyboard. I learned to touch type at 16, and can type almost as fast as I think, so sometimes writing is like an act of improvisation –first thoughts committed to words.

I like to read around a subject, but I am very aware that a lot of research is actually procrastination. After a certain point, I will make something up as I write, then research to verify it is true/possible afterwards. It’s more efficient that way.

It depends. Sometimes it’s the internet, sometimes it’s talking to people, sometimes it’s going to visit a place. I’m a member of several very useful facebook groups, where we can ask, e.g., police procedural or legal questions. I have emailed lawyers out of the blue (finding them by searching for their specialisms), and every single one has been helpful. Twitter is great for finding people with particular areas of knowledge. And I have some very useful and helpful friends. Books, too, of course!

In an unholy and disorganized fashion. I have a box file for each project that I toss real stuff into. I also store images and voice memos on my phone, which I later keep on my computer. I use Scrivener, which allows you to pull all your research into one place, so you can look at images while you are writing. Each project also has a bookmark on my browser, and my desk becomes a repository for stones, feathers, tickets, coins, that provide inspiration. I keep a Moleskine, but it is not project specific. I call it my everything book.

As I say above, increasingly I start with a plan, which I break down into scenes on Scrivener cork board tiles. Then I just start. I have terrible demons sitting on my shoulder, who tell me that I can’t write and everything I put down is bollocks. My strategy to get past them is to write quickly.

Coffee is all it takes. I prefer days when I have nothing else to do. I write best in the morning, and start to fade out about 1pm, when I try to force myself to go for a walk.

Once I start, I’m in there. Sometimes it takes a while, though. The internet is a massive distraction, as it provides me with my work colleagues – other writers who do the daily lonely battle – and who can resist the draw of banter and gossip? I use a software called Freedom, which shuts me off for a given period of time. I am old enough to remember writing before internet, and that was a joy – I rented an attic room and went there every day (I was writing plays at the time) and just immersed myself in my ideas for whole stretches of time. Other people worked in the house – it was owned by a friend who ran a jewellery making business in the basement – so at coffee and meal times I had people I could chat with. I often look back fondly at those days. Today seems so noisy, with all the other distractions. Oh god, I sound like some fondly reminiscing old biddy…

Right now it is pristine, because I am just about to start my next project and spent the entire day yesterday cleaning it out, clearing out great mounds of redundant paperwork and read books and empty food wrappers and bust biros. At the end of a project it’s quite the opposite, because everything stops for the writing.

It’s a shed at the bottom of the garden with heat, power and insulation. I love it because it’s surrounded by greenery, away from the distractions of the house, and usually very quiet – except when next doors lovely, boisterous boys are on their trampoline. I have a desk, lots of bookshelves, a day bed, and lovely things on the walls. There’s usually at least one cat down here, too, either tarting him/herself on the desk or taking up the day bed.

Churn ‘em out. Each one is carving something out of nothing. Even if the something is the wrong thing, you’ve done a bit of Calculatus Eliminatus (https://www.youtube.com/watch?v=_WHrOGCnqZA).

I rarely go back over what I have written until I’m about half way (ie 50,000 words) in. To do so earlier would probably lead me to abandon the project altogether.

2000 words a day, five days a week when drafting. I am very strict with myself on that. Sometimes it takes a couple of hours, sometimes all day and all night. I like to stop, as Hemingway suggests, when I know what’s going to happen next, so I can dream about it in between.

Between three and four months. I expect it to be in a pretty awful state.  Another demon-avoiding strategy is to allow myself to write badly, to make mistakes. I call it my first draft draft zero, because no one sees it except me, and it allows me to think that everything can change for the first draft. I insert comments to myself such as ‘this is wrong’; ‘this will need to change in next draft’; ‘ugh’.

However, I am often surprised by passages that are better than expected – I find myself wondering who wrote them.

I used to print out and read, but it uses up a load of paper, and you have to lug this great thing round with you. I now read the first draft through in Scrivener, because I still like the structure to be fluid – the scenes are still discrete, in their separate containers, so I can move them around if I want. As I read, I write a lot of comments both inline on the text, in the notes panel for each scene, as well as keeping a general notes file going for stuff that is more about the whole novel. I also put together notes on each character, and a timeline for all the events (in Aeon Timeline). Post-its begin to accumulate around my monitor, too. And I record voice memos.

I work on my notes, change the text and rework the structure. I make sure I track every version, because you never know when you might have to look back on what you have done. Finally, when I’m happy that it’s got to proper first draft status (rather than draft zero), I export it into Word and put it on my kindle for another read through. It helps at that point to see it in a different format, perhaps different font. I annotate on my kindle, which is painfully slow, but worthwhile, then I work this second lot of notes into the Word document (again, tracking changes). Then I send it to my editor. 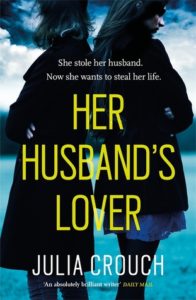 She stole her husband. Now she wants to take her life.

After the horrors of the past, Louisa Williams is desperate to make a clean start. Her husband Sam is dead. Her children, too, are gone, victims of the car accident in which he died.

Sam said that she would never get away from him. That he would hound her to death if she tried to leave. Louisa never thought that he would want to harm their children though.

But then she never thought that he would betray her with a woman like Sophie. And now Sophie is determined to take all that Louisa has left. She wants to destroy her reputation and to take what she thinks is owed her – the life she would have had if Sam had lived.

Her husband’s lover wants to take her life. The only question is will Louisa let her?