The Woman in Cabin 10 by Ruth Ware 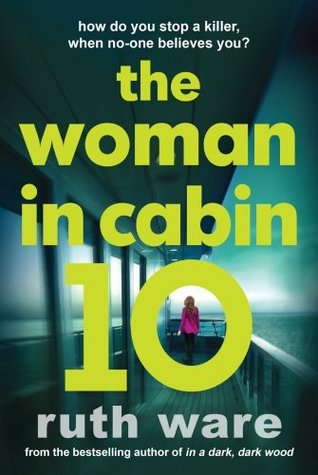 In this tightly wound story, Lo Blacklock, a journalist who writes for a travel magazine, has just been given the assignment of a lifetime: a week on a luxury cruise with only a handful of cabins. At first, Lo’s stay is nothing but pleasant: the cabins are plush, the dinner parties are sparkling, and the guests are elegant. But as the week wears on, frigid winds whip the deck, gray skies fall, and Lo witnesses what she can only describe as a nightmare: a woman being thrown overboard. The problem? All passengers remain accounted for—and so, the ship sails on as if nothing has happened, despite Lo’s desperate attempts to convey that something (or someone) has gone terribly, terribly wrong…

With surprising twists and a setting that proves as uncomfortably claustrophobic as it is eerily beautiful, Ruth Ware offers up another intense read.

This is going to be one of my top reads of the year. That says it all about this book.

I haven’t read In a Dark Dark Wood, Ware’s debut, which has been optioned for a major movie adaptation and is to be produced by Reese Witherspoon herself. So, with the knowledge of such a great debut before it, I have to admit to feeling a little trepidation going into this book. I didn’t know what to expect with Ware’s writing and could this possibly do the debut justice? – which I hadn’t read.

I didn’t have to worry in the slightest. I was immediately pulled into the book by a gripping scene and I was held there by Ware’s utterly fabulous writing. Her style is sublime. She has you completely relating to the protagonist Lo, with little nuances and thoughts thrown in. There’s nothing clunky or out-of-place. It ebbs and flows as beautifully as the oceans with which she sets the story upon.

And as for the story, you have a cast of characters aboard a small vessel and Lo trying desperately to figure out what has happened. It’s sinister and I couldn’t put it down. What I particularly loved were the few chapters that Ware randomly interspersed throughout the story which was from the outside the cruise point of view. These gave a real spine-chilling feel to what we were witnessing onboard the cruise. Really really effective.

And even when you think you have it all figured out – she changes things again. It’s utterly brilliant.

This is a must read for all crime fans.

This is one of the few remaining books that I have left to review. Soon these Recently Read posts will be closing so I can focus on my writing. I am really grateful to have had the opportunity to read such great books.