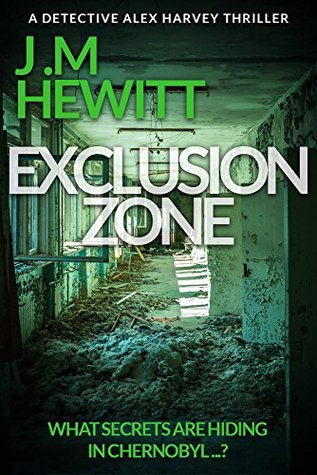 On 26th April 1986, reactor four exploded at the factory in Pripyat, Chernobyl.

At the same time teenager Afia Bello vanished from her home without a trace.

The damage from the nuclear fallout is examined over the following weeks, months and years by Afia’s younger sister Sissy, as she unwittingly uncovers clues relating to her sister’s disappearance, and the secret life that Afia kept hidden from her family.

In the summer of 2015 Private Detective Alex Harvey is hired to investigate the disappearances that have been occurring within the exclusion zone.

He can think of only one person to bring along with him to help; Ukrainian national Elian Gould.

Elian – who was adopted at birth – has her own reasons for accepting the job; namely to search for her own family history which has always been a mystery to her.

But the remaining citizens of Chernobyl are hiding their own secrets and with a darker force at work, the missing person’s case suddenly turns into something much more serious…

Back in July, I did a BritCrime panel with Jeanette and it was then that I heard the concept for Exclusion Zone. It was on my wishlist immediately. I mean, a crime novel set in the exclusion zone of Chernobyl? Really? How fantastic! Then later that month I was lucky enough to meet Jeanette at the Harrogate crime writing festival – and she’s really really lovely (which I already knew from the BritCrime panel anyway, but Harrogate confirmed that) and she gave me a copy of the book! It just happened to, somehow move its way to the top of my TBR pile. Well, with a concept like that, it was going to, wasn’t it?

Exclusion zone moves between two time zones. The period when the reactor exploded and the following years, and the current day. It also has a couple of different points of view. It’s a very clear and understandable book though and these all merge together as you’d expect timelines to merge at some point in a story.

Elian is a strong female lead in this and I really took to her. She was nervous and anxious about a lot of things but she knew how to stand her ground and fight for what she wanted and believed in.

The same can be said for Sissy’s timeline back in Chernobyl. A time of great upheaval and upset. A child at the time, but showing courage and believable actions when things around her are changing at such a rapid pace, in a time none of us can really comprehend. I was fascinated by how at first the explosion was played down and then the evacuation was put in place, and even then, people chose to stay in their homes. Probably not understanding the seriousness of what had occurred. There’s a very weird part in Exclusion zone about a dog and I have yet to Google it to see if it’s true!

A fabulous read, but the setting did it for me.