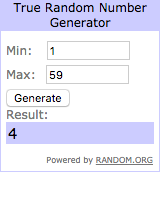 I’ve been running a promotion for a character name in the upcoming novella I’ve written, the DC Sally Poynter prequel.

That promotion has now ended and I have done the draw.

We have a character.

That character is female.

That character is – Donna Dickson

Congratulations Donna! I know exactly which character I am going to rename for you. You’ll fit in perfectly.

The novella will be released this Autumn and I will be releasing further details soon. It’s been a great little project to work on and I’m excited to see what you think of it.