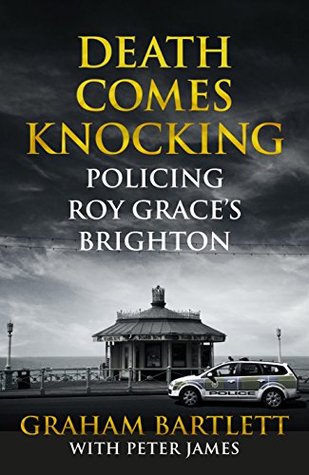 Fans of Peter James and his bestselling Roy Grace series of crime novels know that his books draw on in-depth research into the lives of Brighton and Hove police and are set in a world every bit as gritty as the real thing. His friend Graham Bartlett was a long-serving detective in the city once described as Britain’s ‘crime capital’. Together, in Death Comes Knocking, they have written a gripping account of the city’s most challenging cases, taking the reader from crime scenes and incident rooms to the morgue, and introducing some of the real-life detectives who inspired Peter James’s characters.

Whether it’s the murder of a dodgy nightclub owner and his family in Sussex’s worst non-terrorist mass murder or the race to find the abductor of a young girl, tracking down the antique trade’s most notorious ‘knocker boys’ or nailing an audacious ring of forgers, hunting for a cold-blooded killer who executed a surfer or catching a pair who kidnapped a businessman, leaving him severely beaten, to die on a hillside, the authors skillfully evoke the dangerous inside story of policing, the personal toll it takes and the dedication of those who risk their lives to keep the public safe.

I seem to be enjoying quite a bit of non-fiction at the minute and this is another that joins the ranks of interesting factual reads.

Graeme Bartlett was a high-ranking officer in Brighton and Hove and recently retired, but during his service, he became friends with Peter James. This is an account of the interesting jobs he came across during his career. Written with Peter James, they have linked the real life stories of Roy Grace’s career, linking books up with locations or types of cases mentioned.

The mixture of cases in the book holds something of interest for everyone, from fraud to murder, drug problem changes and public order policing. What I particularly enjoyed about it though was how Graham interspersed his own real life through the pages. As his career progressed, we learned how his home life was progressing, including  some very difficult personal moments that I thought was incredibly brave of him to share.

In this book you will learn about real-life policing, the fantastic camaraderie, interesting real-life cases including photographs and if you’re a Peter James fan you’ll enjoy linking the real places with the fictional stories, and you’ll learn about the man behind the stories as there is a character in the James’ books based on Graham Bartlett.

I enjoyed this so much I became a bit melancholy about my old job, but as I tweeted Graham and told him this, he reminded me I was wearing my rose-tinted glasses. It’s always easy to think fondly of the past, but policing in today’s climate when the cuts are digging deep and morale is low, is a hard job to do. I loved it while I was there, but I love what I do now. Read this and get a real insight to policing.