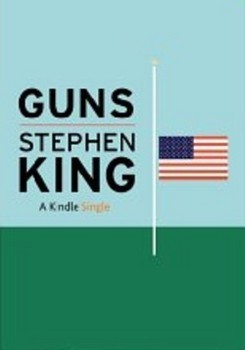 In a pulls-no-punches essay intended to provoke rational discussion, Stephen King sets down his thoughts about gun violence in America. Anger and grief in the wake of the shootings at Sandy Hook Elementary School are palpable in this urgent piece of writing, but no less remarkable are King’s keen thoughtfulness and composure as he explores the contours of the gun-control issue and constructs his argument for what can and should be done.

King’s earnings from the sale of this essay will go the Brady Campaign to Prevent Gun Violence.

I bought this book on Audible . It only took 45 minutes to listen to. It’s not a long read.

It is a hard-hitting read, though. King pulls no punches.

What did shock me about this was something he says about one of his own novels and gun crime. The story around it is unbelievable, particularly for a writer to listen to, and his response, measured.

Though, his response is not measured when he relays an argument he read online that a woman posted about why semi-automatic weapons should be kept. Her argument being that they are simply tools, like a spoon.

This isn’t a completely anti-gun rant. King admits to having his own registered weapons. But, he makes solid arguments for tight control and even talks about people who have accidentally shot family members believing them to be burglars. So I have to wonder if I actually heard him correctly when he said he owned some. (It’s not him narrating.)

From a UK resident perspective and in light of very recent events, this made for a strong read/listen and if you are interested in this topic and you like King, I’d recommend reading how he views this volatile topic.