Today I’m excited to be able to share the cover for the new A. D. Garrett, Simms and Fennimore book, Truth Will Out,

A.D. Garrett is the pseudonym for prize-winning novelist Margaret Murphy working in consultation with policing and forensics expert, Helen Pepper. 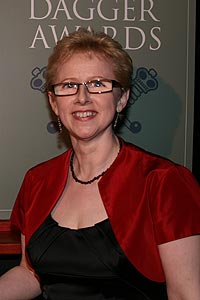 Margaret Murphy has published  nine  internationally acclaimed psychological thrillers under her own name. She is an RLF Writing Fellow and Reading Round Lector, a past Chair of the Crime Writers Association (CWA), and founder of Murder Squad. A CWA Short Story Dagger winner, she has been shortlisted for the First Blood award as well as the CWA Dagger in the Library.

In 2013, writing as A.D. Garrett, Margaret began a new forensic series, featuring Professor Nick Fennimore and DCI Kate Simms. Everyone Lies, which Ann Cleeves rated ‘thriller writing at its best’, was a bestseller, and both that and the sequel, Believe No One, garnered starred reviews from Publishers’ Weekly. Truth Will Out, the third in the series, will be published in November 2016.

Helen Pepper is a Senior Lecturer in Policing at Teesside University. In her earlier career as a CSI she examined over 3000 crime scenes, ranging from thefts and fires to rapes and murders. Later, as Crime Scene Manager for Durham Police, she supervised CSIs in over 50 major incidents. Her expertise is in great demand with crime writers: she is a judge for the CWA’s Non-Fiction Dagger award, and is also a consultant for TV dramas Vera and Shetland. She is a member of the Chartered Society of Forensic Sciences, and has a wealth of experience in the investigation of all crime types, from simple thefts to murders and terrorism.

So, now we know who they are, let’s get on with the big reveal…

A mother and daughter are snatched on their drive home from a cinema. The crime has a number of chilling similarities to a cold case Professor Nick Fennimore had been lecturing on. Then Fennimore begins receiving taunting messages – is he being targeted by the kidnapper? Meanwhile, a photograph emailed from Paris could bring Fennimore closer to discovering the fate of Suzie, his own daughter, now missing for six years. He seeks help from his old friend, DCI Kate Simms, recently returned from the US. But Kate is soon blocked from the investigation… A mother and child’s lives hang in the balance as Fennimore and Simms try to break through police bureaucracy to identify their abductor.