Today I’m thrilled to be able to welcome crime writer, Marnie Riches to the blog to talk about her first draft process.

Having authored the first six books of HarperCollins Children’sTime-Hunters series, her George McKenzie crime thrillers for adults were inspired, in part, by her own youth and time spent in The Netherlands as a student. She also writes contemporary women’s fiction. The Girl Who Wouldn’t Die launched to great acclaim in early 2015, won The Patricia Highsmith Award for most exotic location in a novel at the Dead Good Reader Awards 2015 and went on to be an Amazon top 100 bestseller. The follow-up, The Girl Who Broke the Rules was in the Suspense top 50 for months and months, being heralded as one of the best sequels ever by readers and being voted by many book-bloggers as one of their top 10 reads of the year. Her third George McKenzie thriller – The Girl Who Walked in the Shadows – was released 31st March and is already wowing crime fiction fans.

If I’m writing something in contract for my publisher, I’ll generally prepare a 2-6 page long synopsis for them, setting out the story, highlighting the anticipated subplots and introducing the main characters. This can take some time to have agreed and will often involve tweaking or redrafting altogether. So, I would never begin writing something in contract until the bare bones of the story had been agreed by my editor. If I was writing something for myself, out of contract, I would still do a 2-3 page synopsis. Then, I would just get that first chapter down.

Yes. I guess I do. Actually, thinking about it, there’s a good month of research that would come first. This would involve interviewing people whose fields of expertise are the things I want to write about, or perhaps I’ll do a pile of internet research. Once I’ve got enough knowledge on all the areas that the story will touch on – enough to sound like I know what I’m talking about and enough for me to feel confident in writing about – then, I’ll start that first chapter.

I scribble down notes with pen onto paper, but the rest is done on a keyboard. Then, when I’ve finished the entire first draft and tidied it up, I’ll go back through the story, plot every single chapter in a pad (using a real pen!) and number everything. I have to put the right high points in the right places and ensure that the plot is nicely balanced, with various characters cropping up at regular intervals. If things need to be moved around, I’ll move them around then. The Girl Who Walked in the Shadows was different in that there is an entire “part” dedicated to flashbacks that centre on two characters. I wouldn’t normally drop a big chunk like this into a text, but I couldn’t think of a better way of telling this very important part of the story without ruining the tension earlier in the book. I would have killed an important reveal dead. I think it still works, though.

I write about different countries, urban locales, industries, careers, different political issues, technical stuff like medical procedures, post-mortems, unusual modus operandi of murderers. This all needs careful research, or else my novels would seem amateurish flights of fancy. I’m guessing if you wrote a domestic noir novel that only centred around the home and tension between family members, you would need a lot less research. I devote an entire month to it, though, working full time – up to 70 hours per week. I do more in the midst of penning the first draft, as and when necessary. So, yes. My books are information heavy and research is essential.

I’m lucky that I have a lot of friends who do interesting jobs. They often know the sorts of people I might want to speak to. A friend of mine who is a scientist at Manchester University introduced me to an old college buddy who is a criminologist, who in turn, introduced me to her colleague – another criminologist. My neighbour is a doctor who put me in touch with a consultant pathologist. An old pal is a music agent, who tells me all sorts of anecdotes about the music industry, nightclub ownership and tonnes of other useful and interesting stuff. People are my greatest resource. The rest is down to mining my own experiences and the internet. Very often, I’ll read academic articles about topics I have an interest in, rather than newspaper articles. That way, I know I’m getting accurate and detailed information, rather than layman’s coverage that has political bias. 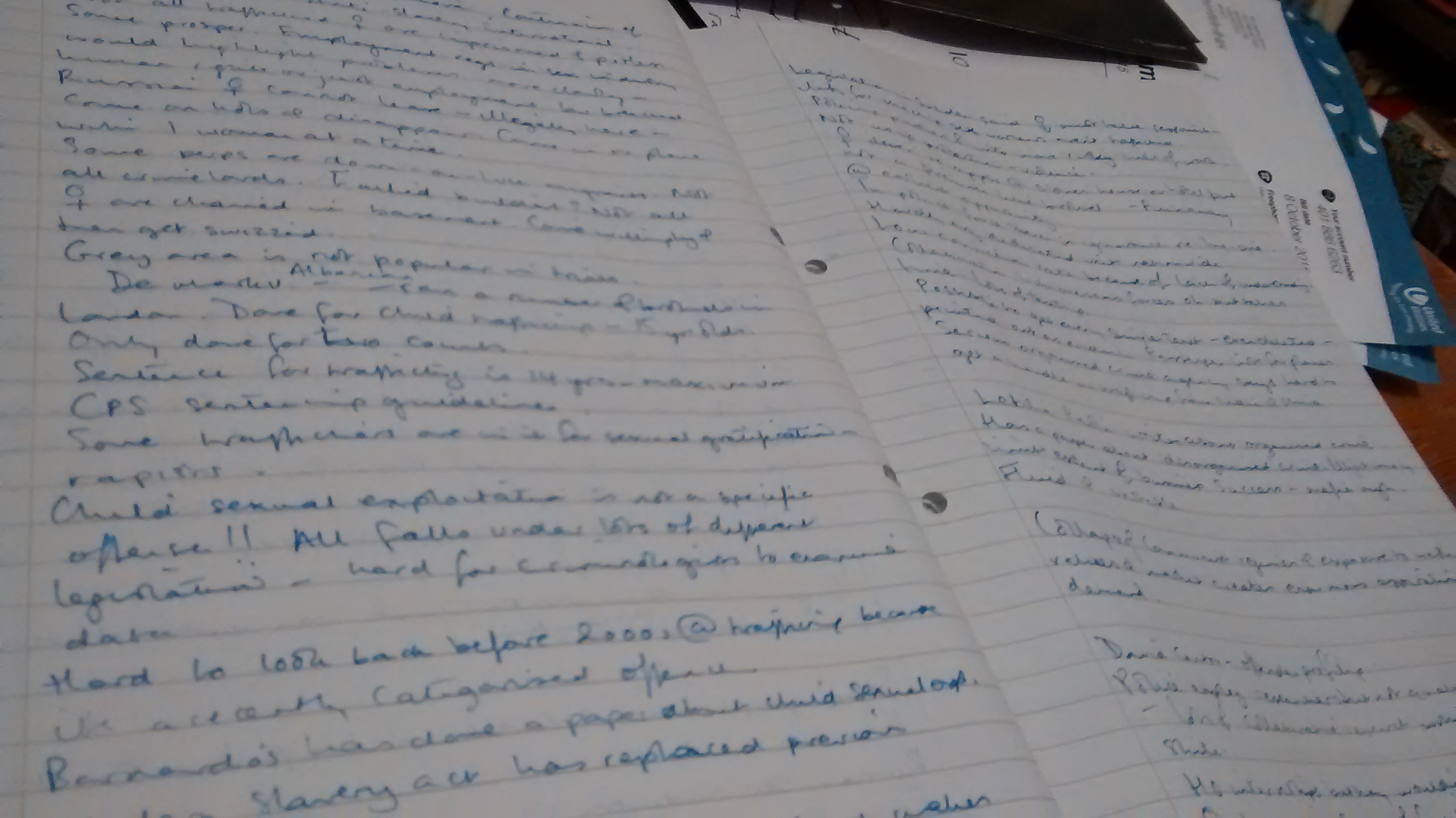 I scribble all my research down into a pad. I have sheaves and sheaves of notes for each book. It’s like being a student again. The rest – taken from real life – I drink in and memorise. I’m big on savouring the vibe of a situation, people’s behaviour or how something looks. You know those parents who watch their children in a school performance and spend the entire time with an i-pad in the air? They get on my tits. Watch the bloody thing and commit it to memory instead of experiencing it second hand through a screen! Sheesh. I’m a big believer in absorbing the information that the world around you has to offer, using my old fashioned, lo-fi human brain.

Every day is pretty much the same and it has become ritualistic. I get to my desk as early as possible, unless I go for a walk or a jog first. I write a bit. I surf social media. I write a bit more. I surf social media. I stand up and walk around. I sit down. I talk to myself a lot. I send emails. I make a cup of tea at 9am, 10.30am (with an apple) and I have lunch (leftovers or crumpets and home-made soup) and a decaf coffee at 12 sharp. More drinks at 2pm. Sometimes I have a power nap at 1.30pm if I’m knackered. I do the school run and then make dinner. I write more from 6pm until I’ve met my word count for the day, fitting in the kids’ bedtime routine around 8.30pm – they’re old enough to do their own thing after dinner. My main odd ritual is that I floss at my desk. I have VERY clean between-teeth. My desk is disgusting, though.

Only what goes on in my office and on social media exists when I work. The stuff happening in my street can go to hell. Unless I go for a walk or a jog. Then, I like to think about my story as I’m listening to birds and looking into people’s gardens. I like getting emails (from some folk), but I get very annoyed if people call me or knock on while I’m writing. When you work for yourself from home and you have family commitments, time is the thing most precious to you and yet, your time is the very thing people take for granted and will try to steal from you. I guard my work time jealously.

Cluttered and full of books, paperwork and mementoes. 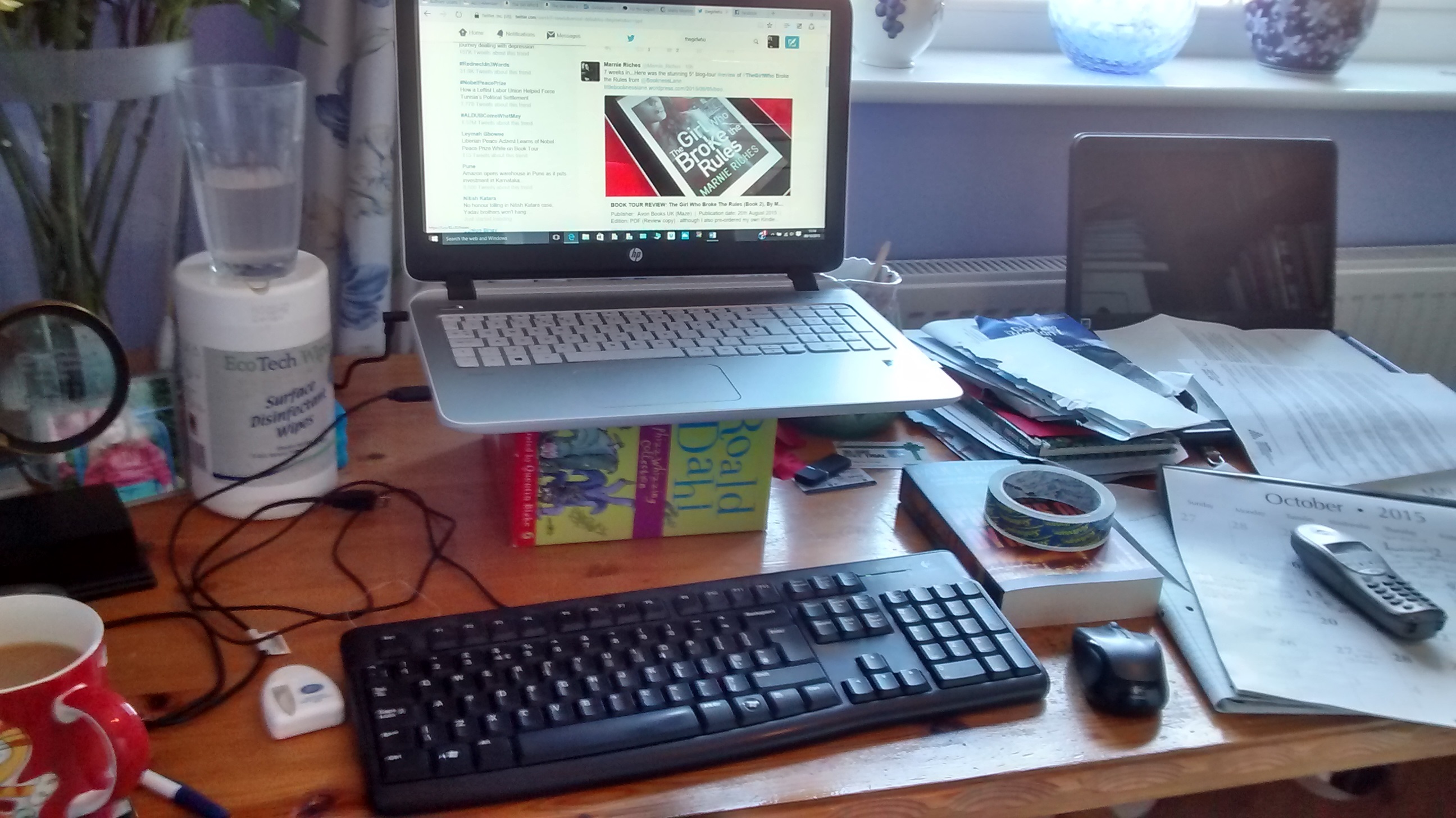 It’s pretty polished already but needs a hefty trim. It will have taken me about three months. I allow a month to edit.

The computer does fine.

I hack out the excess flab and send it off to my agent and then my editor – always in that order. I try to make sure I send as clean a manuscript as possible and I’m brutal with my own first edit because I hate editing. The magic is in the first couple of drafts for me.

The Girl Who Walked in The Shadows 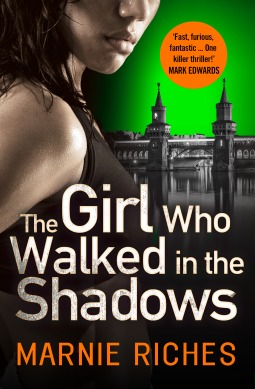 Europe is in the grip of an extreme Arctic blast and at the mercy of a killer, who leaves no trace. His weapons of choice are razor-sharp icicles. This is Jack Frost.

Now a fully qualified criminologist, Georgina McKenzie is called upon by the Dutch police to profile this cunning and brutal murderer. Are they looking for a hit man or a frenzied serial-killer? Could there be a link to a cold missing persons’ case that George had worked with Chief Inspector Paul van den Bergen – two abducted toddlers he could never quite give up on?

The hunt for Jack Frost sparks a dangerous, heart-rending journey through the toughest neighbourhoods in Europe, where refugees and Roma gypsies scratch a living on the edge of society. Walking into the dark, violent world of a trans-national trafficking ring, can George outrun death to shed light on two terrible mysteries?

Leave a Reply to What’s Your Revision Process Like? – Marnie Riches Cancel reply