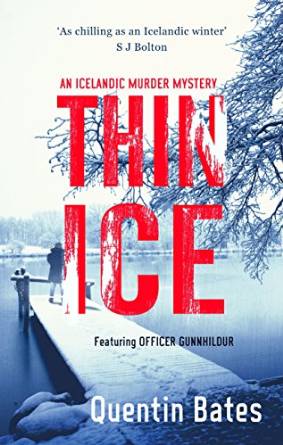 Snowed in with a couple of psychopaths for the winter…
When two small-time crooks rob Reykjavik’s premier drugs dealer, hoping for a quick escape to the sun, their plans start to unravel after their getaway driver fails to show. Tensions mount between the pair and the two women they have grabbed as hostages when they find themselves holed upcountry in an isolated hotel that has been mothballed for the season.
Back in the capital, Gunnhildur, Eiríkur and Helgi find themselves at a dead end investigating what appear to be the unrelated disappearance of a mother, her daughter and their car during a day’s shopping, and the death of a thief in a house fire.
Gunna and her team are faced with a set of riddles but as more people are quizzed it begins to emerge that all these unrelated incidents are in fact linked. And at the same time, two increasingly desperate lowlifes have no choice but to make some big decisions on how to get rid of their accidental hostages…

This is the fifth book in the Gunnhilder series. And for anyone who follows my reading thoughts, this will ring alarm bells in that reading out-of-order makes my skin crawl somewhat. I love to read series in order because of the series character arcs that are happening.

But – saying that, I did enjoy Thin Ice. I adore books with cold settings. I’m not sure why because I have an aversion to actually being cold. Maybe I enjoy reading about the cold while being nice and warm at home! And the setting was particularly cold because it was out of season and the hotel involved in this story was closed for the winter!

Thin Ice is set in Iceland where Quentin Bates has spent many years residing, so his understanding of the way of life shines through.

Though there is an overarching storyline for the regular characters which I would have liked to have followed from the start, the new characters were brilliantly crafted. I really enjoyed reading about them. The two small-time crooks were wonderful to read, especially Magni. Rather than just being an easily written crook, Magni was a well-rounded and an actually likeable guy.

The interactions between the set of characters was something that kept me turning the pages. With the right amount of tension from a character quite the opposite from Magni and from a couple who are drawn into their predicament by circumstances beyond their control. It’s an insightful and clever read. Smooth, slick, and cold with escalating tension to keep you turning the pages. A perfect read for Icelandic crime fans and fans of smart crime. This series is one to add to your shelves if you haven’t already.