Monument to Murder by Mari Hannah 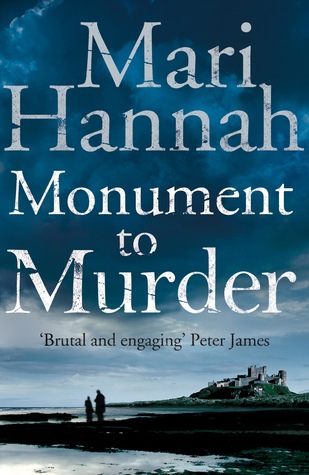 When skeletal remains are found beneath the fortified walls of an ancient castle on Northumberland’s rugged coastline, DCI Kate Daniels calls on a forensic anthropologist to help identify the corpse.

Meanwhile, newly widowed prison psychologist Emily McCann finds herself drawn into the fantasy of convicted sex offender, Walter Fearon. As his mind games become more and more intense, is it possible that Daniels’ case has something to do with his murderous past? With his release imminent, what exactly does he have in mind for Emily?

As Daniels encounters dead end after dead end and the body count rises, it soon becomes apparent that someone is hiding more than one deadly secret…

I love reading series fiction because you can really get involved with the characters. There is more opportunity to become involved with their lives as the writer has a longer arc to play with for storylines for any character they choose. So, after finishing the Ellie Griffiths, Ruth Galloway series (as far as it’s come) earlier this year, I had to decide on another series to start or finish and I realised that I had been reading Mari Hannah’s Kate Daniel’s series but had now become a little behind, so this was a perfect series to catch up on next.

I will start with a disclaimer, by saying that Mari is a friend, so take these thoughts as you will.

It had been a while since I had spent any time with Kate Daniels, but it felt like slipping onto a sofa with a glass of wine and a good friend when I picked up Monument to Murder. In fact, I’d kind of forgotten just how much I’d enjoyed Kate’s company.

She has a great relationship with her DS and the rest of her staff. She’s firm but she’s also fair. She also has a complicated love life! Which adds a more sensitive side to her and it’s nice to see because she is very efficient at her job.

I loved the setting for Monument to Murder. The rugged coastline that is attended at a particularly cold time of year and I adore cold settings! Mari Hannah sets it in your mind beautifully. And with an added chill factor.

I liked the two strands of this novel. It, at first, seems as though there are two completely different stories being told and even though that was the case, I was thoroughly enjoying each part of them. Every time we moved from one to the other, I was being held there by great storytelling and real characters that made me want to know more, that made me want to find out what happened next for them. But, of course, you’re not going to have two random stories running through a novel. They do converge and converge brilliantly and smoothly.

The antagonist Walter Fearon is suitably creepy, even his name is enough to give me the creeps. He’s not someone you’re going to want to meet in a hurry. This is where Mari’s work as a probation officer has come to serve her particularly well, I imagine. She has crafted a brilliant character in Fearon.

This is another solid book in the Kate Daniels armoury and I’m looking forward to catching up with Kate again.