Today we are having a cover reveal – and I love these! – There is just something I love about covers. Never mind that old adage about never judging a book by its cover, that might be an allowance for people, but come on, let’s ogle those book covers, because they are fabulous!

The book cover being revealed today is Captcha Thief by Rosie Claverton. Not only do we have the cover, but Rosie is answering a few questions about her cover for us.

We also have a giveaway for anyone tweeting this post or commenting!

You could win ebook copies of both Binary Witness and Code Runner, plus a postcard of the book’s stolen painting with lines from the first chapter! Two books! Just for commenting or sharing. 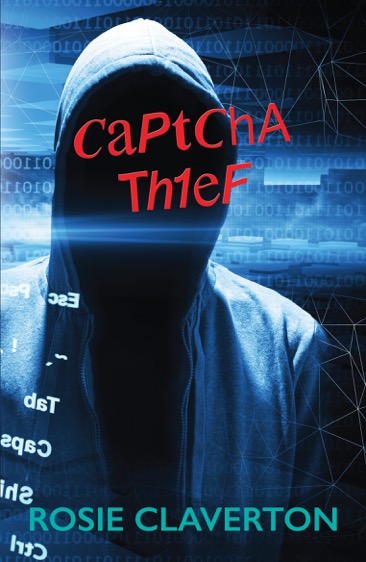 Were you able to have any input in the design and if not, are you happy with the results?

I sent my editor at Crime Scene Books a list of key words and ideas for imagery, along with a Pinterest board of visual inspiration. And I was wowed by the cover!

What are you allowed to say about the book right now?

In Captcha Thief, agoraphobic hacker Amy Lane and her ex-con assistant Jason Carr are solving the puzzle of a murdered security guard and a stolen Impressionist painting. But Jason starts questioning his role in their partnership and speeds off to North Wales with an ice-cold, attractive NCA agent. Amy is wrecked by that decision, and there are bad consequences all round.

I’m rubbish with titles. At what point did the title come to you?

After several previous versions had been booed off stage! At different points, the novel was called Exhibit @ and Stealth Portrait, but I really love Captcha Thief. My husband and I came up with it at the eleventh hour.

4th February 2016 – and for the first time Amy Lane will be in paperback as well as ebook!

I think I would be Cerys Carr, Jason’s sister – she’s come a long way since her bratty roots in Binary Witness, through the upheaval of Code Runner, and she’s now starting out as a probationary constable in Captcha Thief. I’m so proud of her!

Thanks for talking to me, it’s been great having you and I can’t wait to read Captcha Thief.

What do you think of book covers, is your first impression made by a book cover?

Don’t forget the giveaway as well!