Today I’m pleased to welcome J.S Law to the blog to talk about his first draft process. 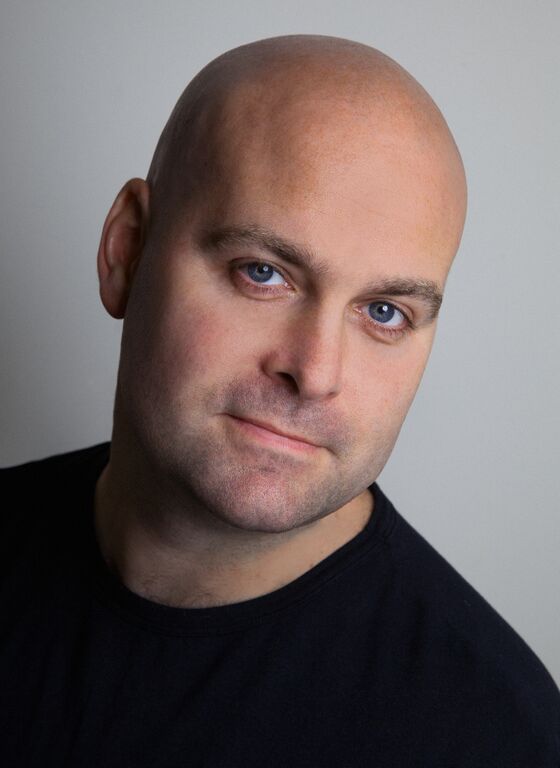 James joined the Royal Navy in 1993 as an apprentice and went on to serve for twenty years, the majority spent in the Submarine Service. He rose through the ranks, taking a commission as an engineering officer in 2001, and serving as a Senior Engineer and Nuclear Reactor Plant Supervisor, where his responsibilities ranged from the safety and operation of the submarine’s nuclear power plant to hydraulic plants, fridges and toilets; it was the latter of these tasks that brought the majority of any pressure. His final years in service were spent training future submariners in his role of Senior Lecturer in Nuclear Reactor Engineering.

Having written short stories and novels throughout his naval career, James completed an MA in Creative Writing at Portsmouth University shortly before leaving the navy in 2013, completing his debut novel, Tenacity, shortly afterwards. James lives in Hampshire with his wife, Elaine, and two children. He spends what spare time he has riding his bike around the South Downs and travelling to Edinburgh to watch Scotland play rugby at Murrayfield stadium.

I’m an obsessive plotter – like I won’t start writing until I have at least fifteen to twenty-five thousand words in plot, back-story, characters etc. I think I almost do my first draft like this. So for me, the first thing to do, is to go to my lovely big whiteboard, get some pens and just map out the key components that I want to be in the story, then start looking at things that link them and how a storyline might knock them all about and shake them up.

Yes – I think I have a very structured approach, maybe a little too structured, if that’s possible! I start at the whiteboard mapping out ideas and then move those thoughts to some mind mapping software – I use iThoughtsX in case anyone wants to know – I play around on there using the lines to link characters, themes and crimes and then, when I’m ready, I start a document in word and write a full synopsis, this can be upwards of 5-10,000 words or more, then I’ll use that, insert a table and do a chapter by chapter breakdown. I use three columns to capture different thoughts, ideas and motives. As I said above, In some ways this is my first draft as I look at each chapter and work out what will happen, but also what I want the reader to think, what threads I want to lay down, what things I need to foreshadow and what I want the chapter to achieve. This can take a long time… Once I have my breakdown, I open scrivener and start into my first draft proper. My first drafts are messy affairs. I don’t stop to research or for anything really, I just get the story down. If I don’t know something, I make it up, or just leave it with a note to come back later. I work in scrivener until I’ve done the first draft and an on-screen edit, then I export to Word and work from there – usually printing off and doing a paper read through and then editing as required.

Keyboard – every time. Doctors joke about my handwriting!!

You know, not very. I write in the Naval setting, which I now well after 20 years in the navy, but I don’t write procedurals and don’t want to, so for me, if I don’t know what a real-life copper might do, I just make it up – it’s fiction after all. Even on my naval stuff, for reasons of security, or just because I don’t know, some things aren’t totally accurate, but only about 0.001% of the population would know, and half of them won’t care, so I just go with whatever I think at the time – the key is to have an exciting story, not a manual.

In the manner of a sloth climbing a tree – slowly and reluctantly!

Evernote – I’m never without my phone or ipad and I take notes, pictures, voice recordings etc. into them all the time.

Once I have my chapter breakdown, I normally know the shape, but things still change and I’m happy with that – so often I’ll reach a point and something will happen that I like, so I’ll have to make changes to the plan. Tenacity started off as a book about a serial killer and became something entirely different half way through. I didn’t stop and go back though, I just carried on and wrote the second half as it came, then went back and changed the beginning after – the key is to finish!

Green tea – I drink an outrageous amount of it when writing. Other than that – not really. I do clean the study between drafts, kinda…

I get pretty lost in it and can be a tiny bit grumpy if I get disturbed, so I try not to write when kids are up and about or people are around that are likely to want to interact with me. I think, as a writer, you really have to protect your writing time jealously, almost to the point of being unreasonable. Most other people won’t ‘get it’ and think of it as a hobby anyway, whereas at my day job, people wouldn’t just call to chew the fat. If I’m at my study writing, people will wonder in with a whole host of things that break my concentration ‘can you help fold the bedding’ is a totally reasonable request, but it isn’t time sensitive and, in my humble writer’s opinion, can and should wait, though it seldom does.

After I picked up my deal for Tenacity I re-decorated my study, put a huge whiteboard on one wall, a new curved desk and a large screen mac, so the room looks pretty good. However, I’m quite messy and when I’m in a writing cycle I don’t do a lot of clearing up, so the study is often very messy, getting cleaned up only between drafts. 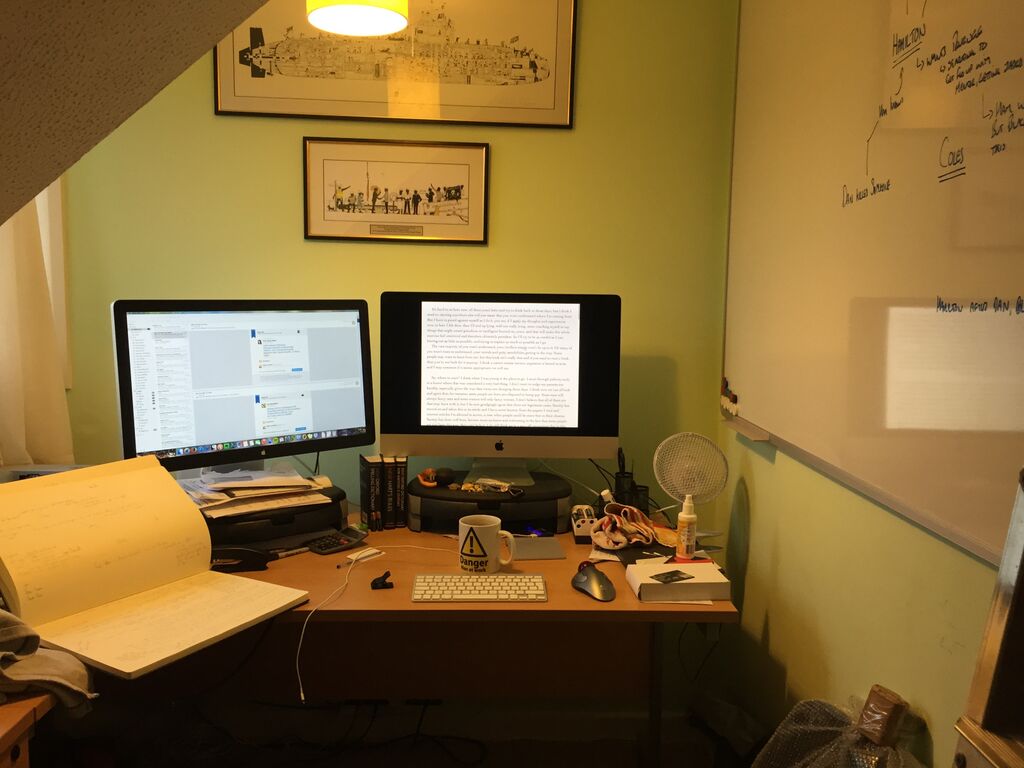 Smash out the words and sort ‘em later. I don’t stop for anything during my first draft. I see many writers counting words in a day. Word counter or other method of keeping track of progression? Definitely a word-counter and one of my close friends and I actually do daily reports on progress to each other. I use the deadline tool on scrivener too, so I know how much trouble I’m in.

My fastest first draft was 38 days start to finish – others have taken longer. Tenacity took me around 7 months to write. 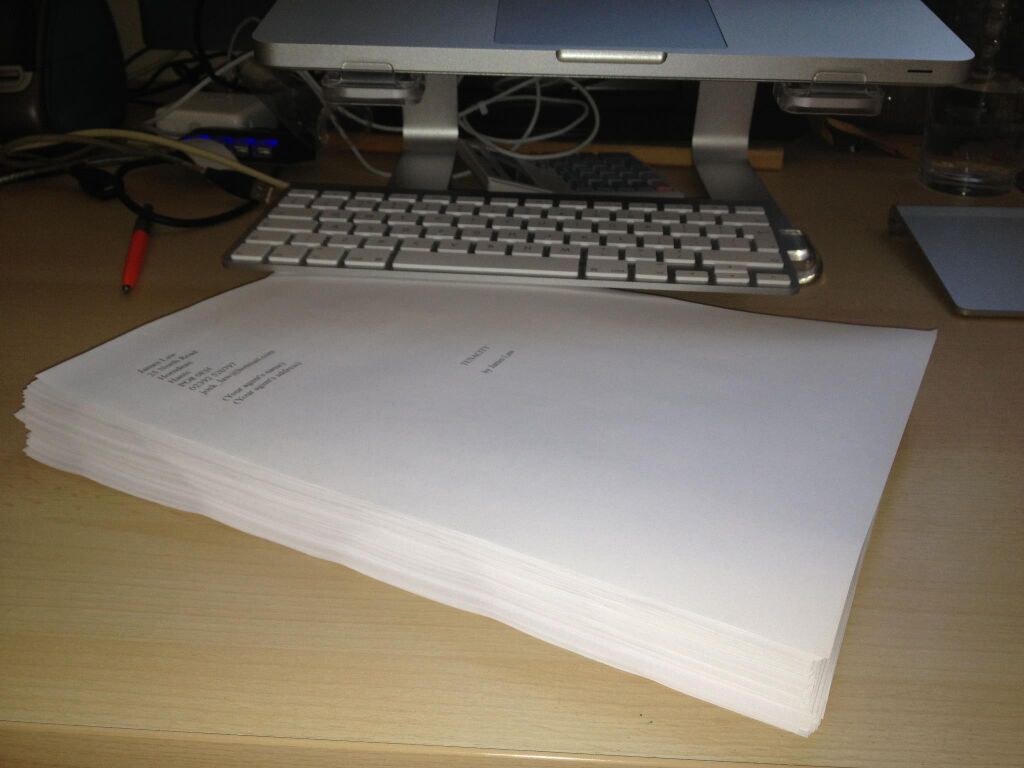 The vast majority of my book consumption is audiobooks. I drive a lot and listen while I work out and sometimes when I walk. I do around 25-30 audiobooks a year. When I do actually read, I’m e-reader all the way, but I still buy books as I like having them around. This is obviously different with my own drafts, where I prefer on screen until it’s quite mature – then I’ll print out and bind for a paper edit. What happens now that first draft is done? I’ll try and get some space, if deadline allows, take a few weeks away from it before I come back to edit and re-read. I normally read a book then to take my mind off of my own and to fill the gap. 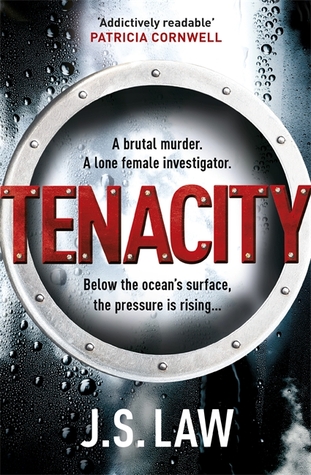 Suicide must be investigated.

Especially when a Royal Navy sailor kills himself on a nuclear submarine, only days after his wife’s brutal murder.

Isolated, and standing alone in the face of extreme hostility, Dan soon realises that she may have to choose between the truth and her own survival.

Justice must be served, but with a possible killer on board the pressure is rising and her time is running out…