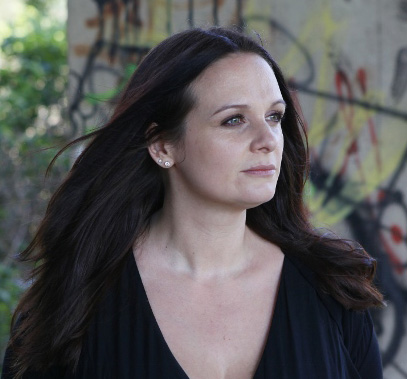 Cally lives in Bristol with her partner and young son. Born in Worcester, she studied for a degree in Psychology at the University of Northumbria, Newcastle.

Her debut psychological thriller THE ACCIDENT was published in the UK by Avon HarperCollins in April 2014 and has been sold to nine other countries. To date it has sold 150,000 copies in the UK alone and was listed as one of the top ten bestselling debuts of 2014 by The Bookseller magazine.

I start a new notebook and begin mind-mapping. My novels normally begin with a ‘what if…’ scenario and I work out the story from there. I’ll write down everything that occurs to me – characters, backstory, scenes etc – and then I give myself a bit of time away from the notebook to see if the idea crystallises in my head. Once it does I begin scribbling again, to flesh out the idea and get to know my characters.

I always start with a notebook and scribbles. I find I can’t get an idea clear in my head just by thinking about it, I have to put pen to paper. 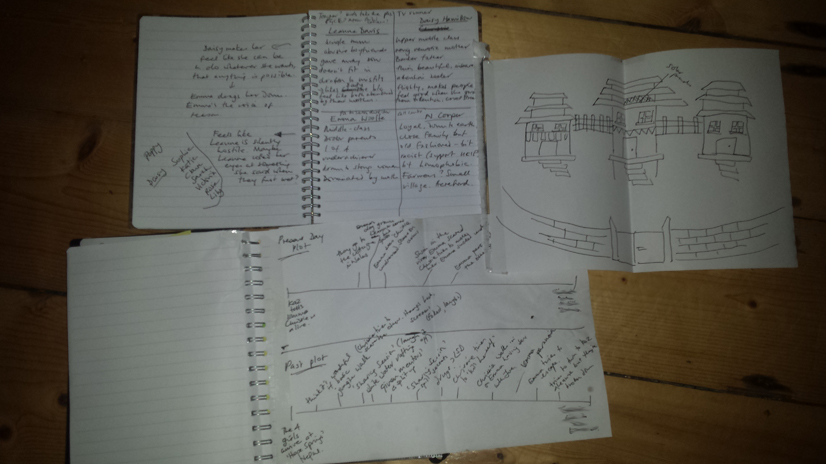 It varies. When I wrote my first psychological thriller, THE ACCIDENT, my son was only a few months old and I wrote the first twenty chapters directly into a notebook, writing in 45 minute snatches of time whenever he napped.

With my second psychological thriller THE LIE my son was old enough to go to nursery so I wrote straight onto the computer. It’s easier to correct your work if you type straight to the computer and typing up handwritten drafts can be very time consuming (although you do get to correct the text as you transcribe).

Very. With THE ACCIDENT I didn’t have to do a huge amount of research, other than into Post Traumatic Stress Disorder and sociopaths, but I did loads for THE LIE. I read about toxic friendships and why women kill and I watched documentaries about cults and Charles Manson. I also visited an animal sanctuary in Devon.

The novel I’m plotting now, THE FORGETTING, has involved even more research and, for the first time, I’ve interviewed several people, including an ex-policeman, a psychologist, an ex-drugs rep and a mobile phone expert to ensure my story is accurate.

I read a lot, mostly books, but also credible articles online. I watch documentaries, I google for images, I visit places and I interview people (mostly via email but a few I’ve spoken to over the phone).

Most of it goes into my notepad – particularly notes I’ve made from documentaries and non-fiction books and print outs of the interviews I’ve conducted. For THE LIE I made a Pinterest board to store all the images of Nepal I’d sourced online. It’s open to the public but you can make Pinterest boards private too. Some of my research ends up on the wall in front of my desk. For THE LIE I sketched a map of Ekanta Yatra, the fictional retreat/cult on the Anna Purna range in Nepal where my four characters spend the majority of the novel.

Once I’ve mind-mapped my story to death I start plotting it. I usually use the 3 Act Structure and plot my scenes against it, ensuring I’ve got an inciting incident, climax etc, then I start writing.

I normally walk around my house barefoot but, when I sit down for writing, I need warm feet so put on the warmest socks I can find (normally the ski socks from my one and only skiing trip). I also like to have a drink at hand and some chewing gum to chew on. Sometimes I’ll listen to music and find instrumental soundtracks particularly good as they’re very atmospheric and can get me in the mood for the scene I’m writing. I wrote THE LIE to the soundtrack of the film ‘In Time’ on repeat.

If I’m completely lost in the scene I’m writing I lose track of time. If I’m struggling I’m easily distracted by the outside world.

I’m very lucky to have my own office in our house but it’s a multifunctional room – one third desk and books, one third gym (well…a treadmill) and one third guest sofa/bed. If someone comes to stay I have to wrestle the treadmill up and angle it out of the way so I can pull out the bed which pretty much butts against my desk. It’s a snug room!

Edit at the end.

It depends how close I am to my deadline! If I’m getting close to my deadline I like to work out how many full days I have to write (I write full time four days a week) and how many words I have left to write, approximately, then I try and hit that word count each day.

Anywhere from four months to seven months. The shape it’s in very much depends on how detailed my plotting was before I started writing. When I finished the first draft of THE ACCIDENT I only had to give it a relatively minor edit afterwards (I plotted it in detail in my head during the many, many broken nights I spent breastfeeding my son!). THE LIE was more of an experiment – I started writing it with only the bare bones of a plot and, as a result, had to spend three months afterwards rewriting it to get it into shape.

I like reading my first draft through on an e-reader as it gives me a sense of distance. The aim is to read it all the way through and make notes on parts that aren’t working particularly well. I’m reading for plot, structure and characterisation in that first read through – an overall impression of the story.

What happens now that the first draft is done?

Once I’ve completed the first draft and read it through I cut and paste the chapters and scenes into YWriter. They’re much easier to see at a glance that way, and you can drag chapters and scenes around and delete them at the click of a button. It makes re-structuring the novel much easier. Once I have the structure sorted I’ll go through the novel scene by scene and edit it until I’m happy with it. If there’s time before my deadline I’ll then print the whole thing out and read it again – out loud this time – and tweak areas that still need a bit of work. 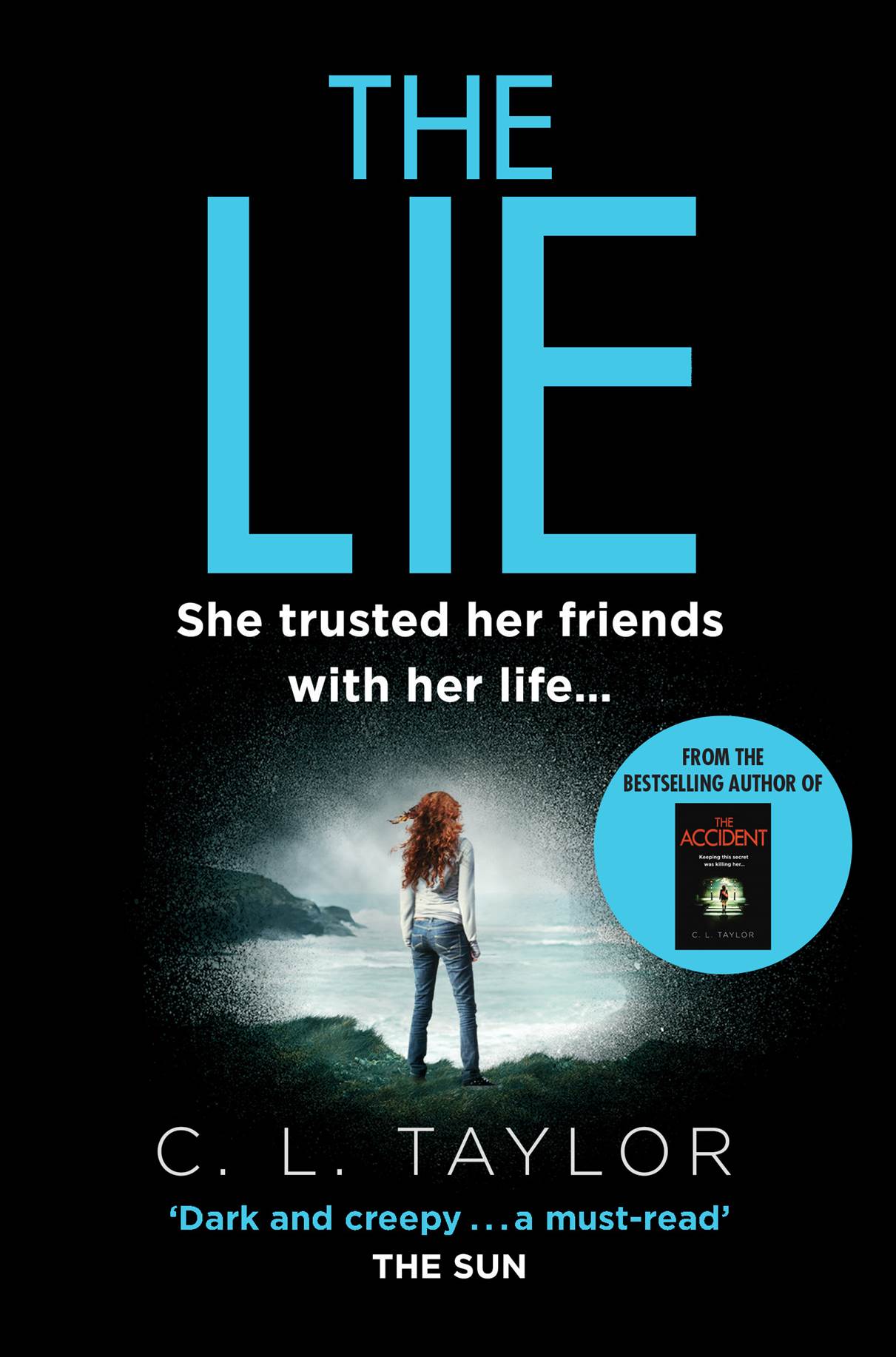 I know your name’s not really Jane Hughes…

Jane Hughes has a loving partner, a job in an animal sanctuary and a tiny cottage in rural Wales. She’s happier than she’s ever been but her life is a lie. Jane Hughes does not really exist.

Five years earlier Jane and her then best friends went on holiday but what should have been the trip of a lifetime rapidly descended into a nightmare that claimed the lives of two of the women.

Jane has tried to put her past behind her but someone knows the truth about what happened. Someone who won’t stop until they’ve destroyed Jane and everything she loves…

“The Lie felt to me like a Black Narcissus for the Facebook generation, a clever exploration of how petty jealousies and misunderstandings can unravel even the tightest of friendships. Claustrophobic, tense and thrilling, a thrill-ride of a novel that keeps you guessing.” – Elizabeth Haynes

“The Lie is absolutely brilliant – The Beach, only darker, more thrilling and more tense. It’s the story of a twisted, distorted friendship. It’s a compelling, addictive and wonderfully written tale. Can’t recommend it enough.” – Louise Douglas