I know this month I’m supposed to be reading NetGalley books only but Jane asked me for a quote for her book so I slipped this one in. And that’s a disclosure for this novel…

Before It’s Too Late by Jane Isaac 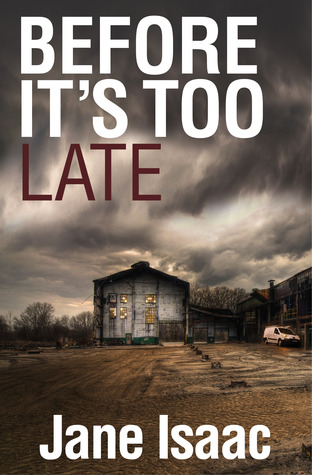 I concentrated hard, desperately listening for something familiar, the sound of life. I heard nothing. Just my own breaths and the wind, whistling through branches above… The thought made me shiver. I am buried alive. Following an argument with her British boyfriend, Chinese student Min Li is abducted whilst walking the dark streets of picturesque Stratford-upon-Avon alone. Trapped in a dark pit, Min is at the mercy of her captor. Detective Inspector Will Jackman is tasked with solving the case and in his search for answers discovers that the truth is buried deeper than he ever expected. But, as another student vanishes and Min grows ever weaker, time is running out. Can Jackman track down the kidnapper, before it’s too late?

As I’ve mentioned, Jane is a friend and I was an early reader of this novel and have just read it again, so in so far as this goes as a review, take it as slightly biased (as we did with Mel Sherratt’s, Follow The Leader) and I’ll be as factual as I can.

This is a break from Jane’s usually series of DI Helen Lavery. Will Jackman is a new protagonist and one I really liked and connected with. To be honest, every time he’s mentioned I just picture Hugh Jackman so she’s off to a great start there! He’s down to earth, has a daughter and is driven at work. There is some back story, but it doesn’t overshadow the main story which is excellently done.

Jane covers the issues of Chinese culture within Before It’s Too Late as missing student Min Li is Chinese and her parents are back home in China. Rather than feeling as though you are reading from a textbook, it’s part of the characters which is what it’s supposed to be, but Jane must have done an awful amount of research to get it right. The novel is told from two narratives, that of Min Li, where we find out about her life here and her life back home, the expectations of her parents and extended family, and then the third person narrative of the police investigation.

I was just immersed and swept along with it all. The bleakness of Min Li’s situation was dark and sinister but was broken up by the determined and commanding protagonist Will Jackman as he searched for her and also fought the usual office politics that occur within policing. I couldn’t stop turning the pages.

This is a great read with a protagonist I hope we see more of because I rather like him.