Today I have the lovely Rebecca Muddiman to talk to us about her first draft process. Rebecca is from Redcar and has lived there all her life except for time working in Holland where she lived on a canal boat, and in London, where she lived six feet away from Brixton prison. She has a a degree in Film and Media and an MA in Creative Writing. In 2010 she won a Northern Writers’ Time to Write Award and the Northern Crime Competition in 2012. Her first novel, STOLEN, was published in 2013. Her second, GONE, was published in January 2015. She lives with her boyfriend, Stephen, and dog, Cotton, in a semi-detached house which they have christened ‘Murder Cottage’.

Once I’m fixed on a particular idea I try to develop it into an actual story by brainstorming possibilities, scribbling down anything that comes to me and reading around the subject. A lot of what comes out of this time is nonsense. 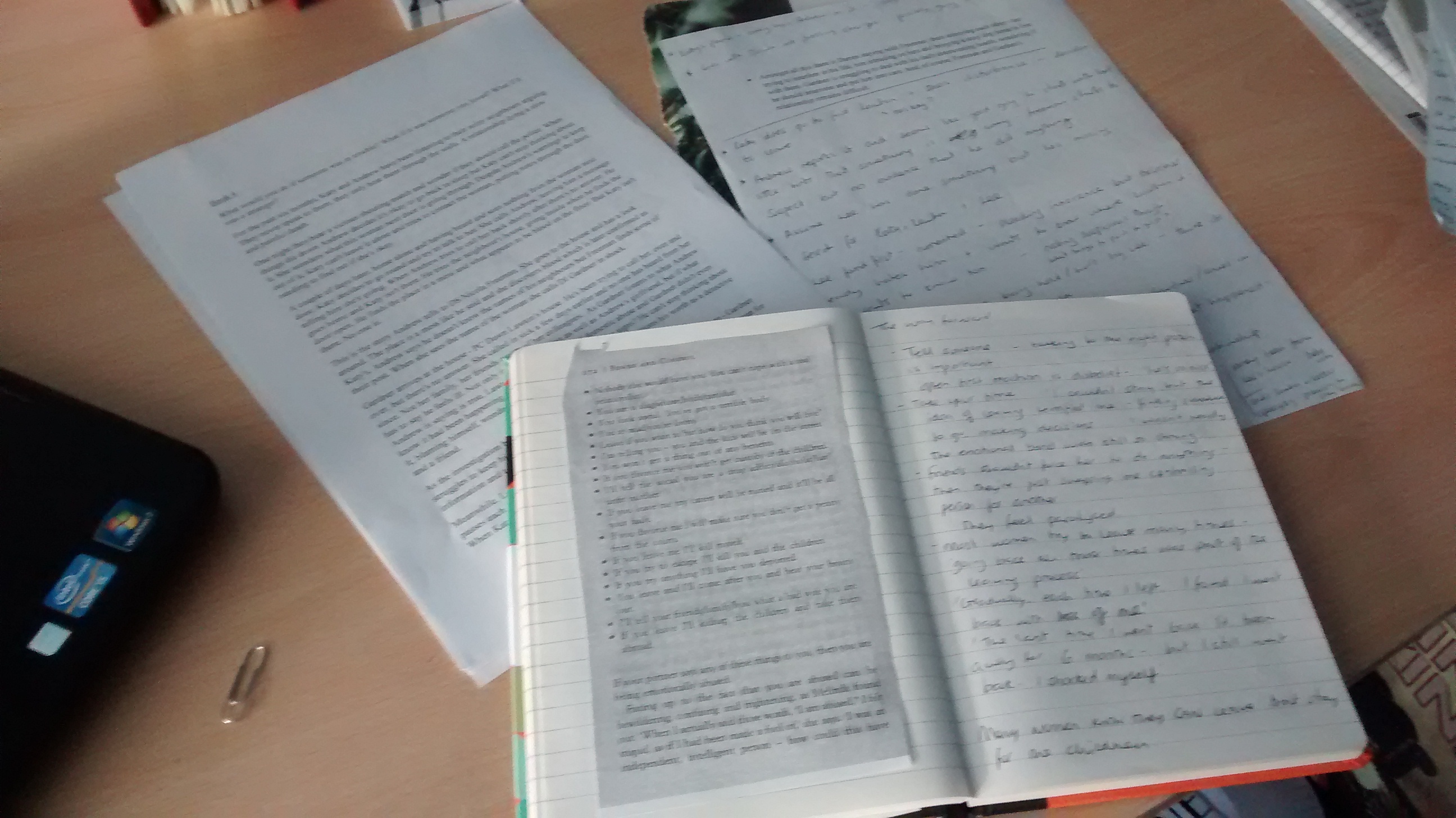 When I’ve worked through it enough to know there’s a story there, I start to write an synopsis (even though I hate them with a passion). Often this goes through lots and lots of drafts itself, trying to fit the pieces together so it resembles something like a plot.
When that’s done I get out the index cards (or rather the scruffy bits of paper) and lay them out on the floor so I can see each scene, find plot holes, and mess about with the structure. Once I’m happy with that I do a chapter by chapter outline so I have a guide while I’m writing. Of course, a lot of it goes out the window once I start!

Initial thoughts are usually pen and paper but once I start putting a synopsis together and, certainly once I start actual writing, it’s straight to the keyboard.

I like to read a lot around the subject of the book but I try not to get too bogged down by research. One thing I really hate in books is all the research thrown in which just slows the pace. So a lot of the time I find myself going the other way by not putting any of it in. I’m quite nosy so I like reading about procedure but if something’s not relevant or not pushing the story forward I’m not bothered about putting it in. I’m not too concerned with getting every last detail right. I know a lot of people enjoy reading the ins and outs of police procedure but ultimately I’m writing fiction so I think a lot of it’s irrelevant. 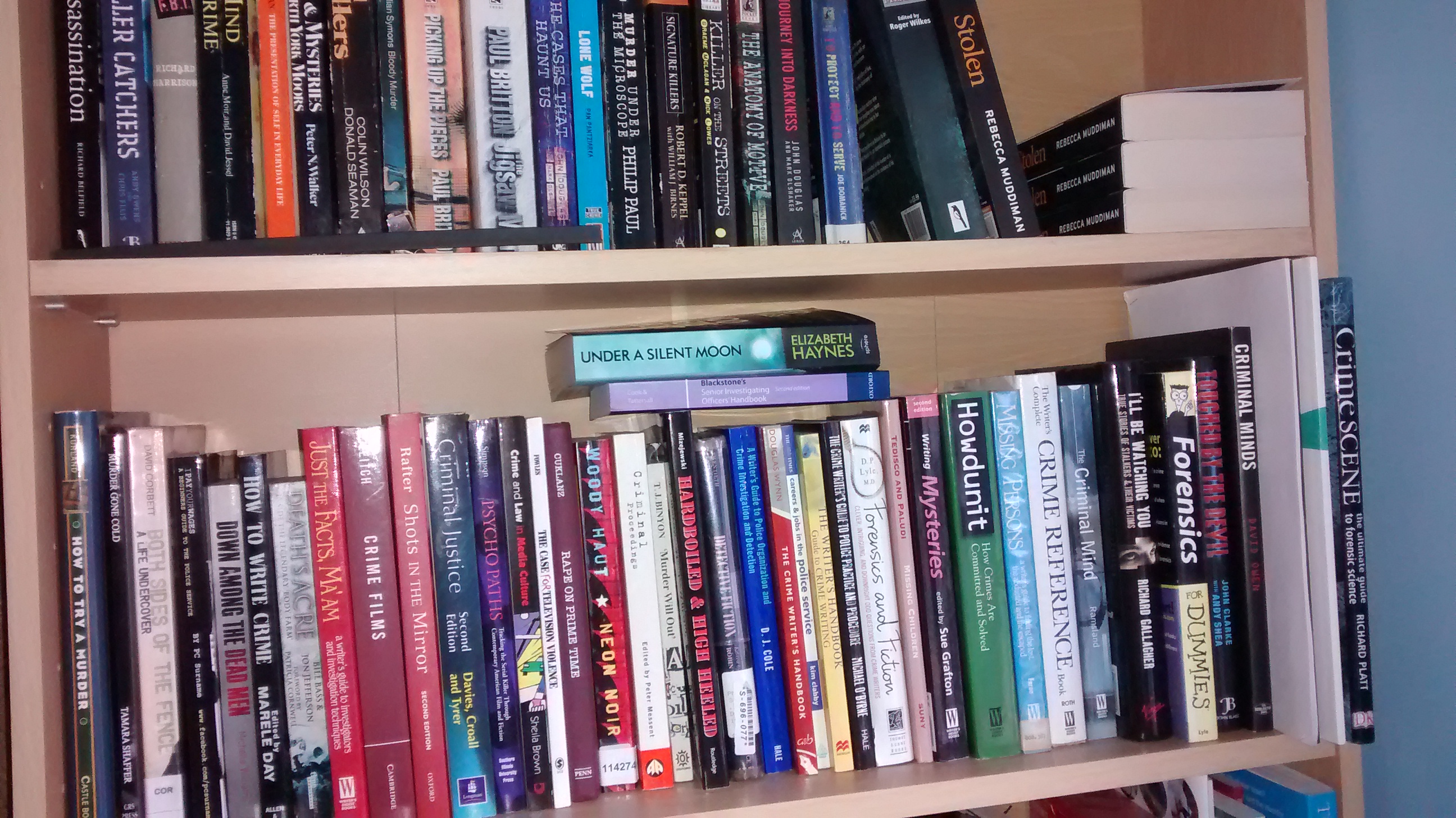 I read a lot either online or in books. The library at Teesside University has some brilliant books about crime and policing and everything else you might need to research a crime novel so I spend time there making notes. But, again, a lot doesn’t make it into the actual books. I do spend a lot of time Googling, checking facts, but that can lead to a rabbit hole of finding out useless information.

I’m extremely unorganised. I tend to write ideas down on scraps of paper that I then can’t keep track of. I have bought myself a few new notebooks with the intention of keeping everything together which I’ve started using for the next book but we’ll see how long it lasts. I bookmark a lot of pages online and then forget about them. I also have folders and folders of newspaper cuttings and articles that caught my eye at some point, most of which will never amount to anything but I keep them just in case.

I try to give myself a time frame and plan my weeks according to that. It doesn’t always work but it makes me feel like I’m working towards something. I start out with good intentions of sticking to the outline but as I write and get to know the characters, other things occur to me and I go off on tangents. I try to write in a linear fashion from start to finish but sometimes I get stuck on a scene and I have to move past it and start another chapter or else I’d never move on.

Not really, although I always write first drafts sitting at my desk. I can edit and brainstorm elsewhere but I find it hard getting into the right frame of mind to actually write if I’m not sitting here.

If it’s going really well, the world sort of falls away for a while and I realise that several hours have gone past without me realising or without needing to eat. But this is rare. The rest of the world is all too present most of the time but the story world does intrude on it frequently and I have to slip away to scribble something down.

I’ve nicked the box room as my writing space and it’s an absolute tip most of the time! No matter how often I tidy my desk, it seems to just accumulate junk. And it’s probably a mistake to have bookshelves in here as I’m frequently drawn to flicking through them when I should be working. 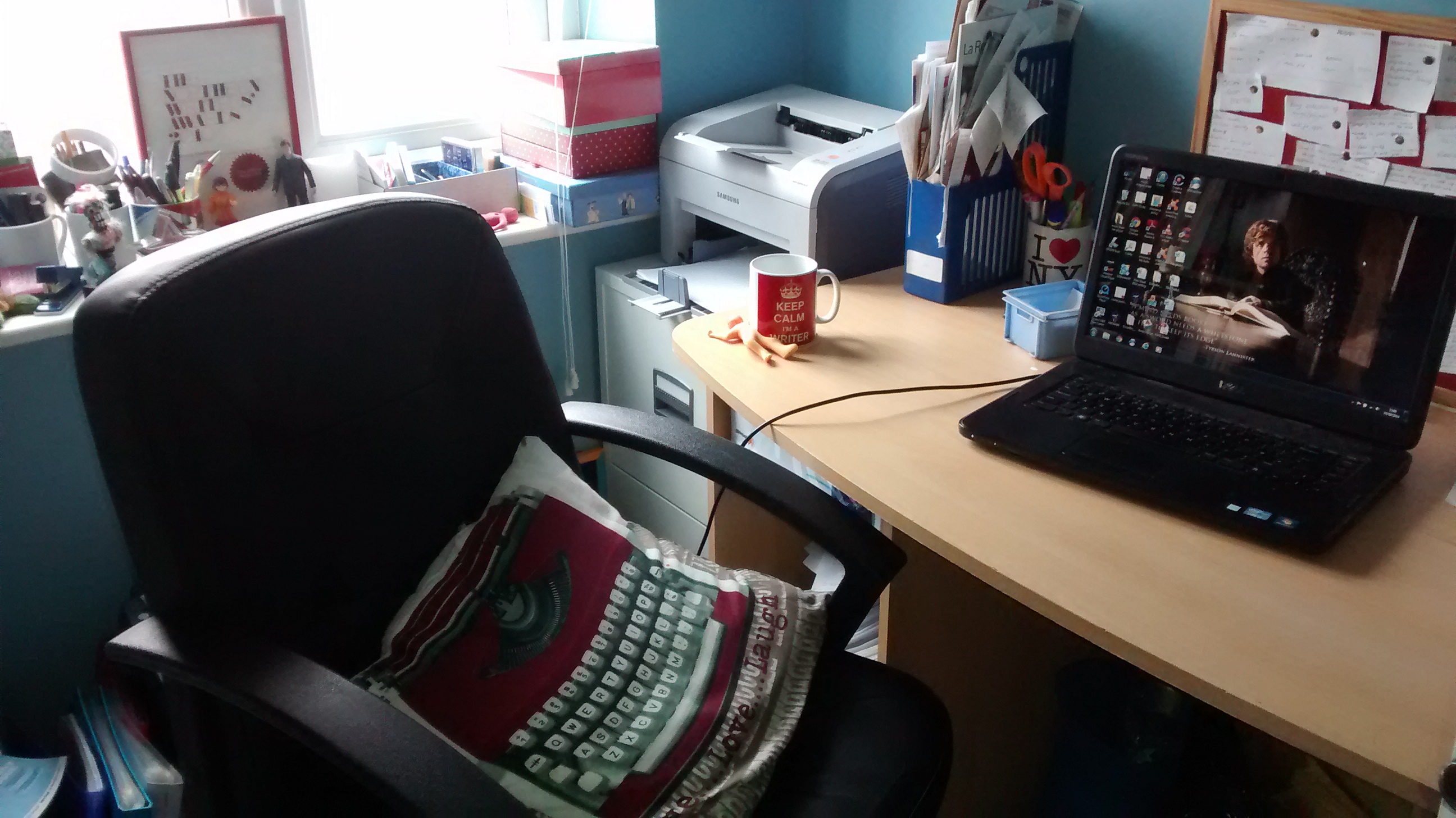 Definitely just keep getting the words out. I know writers who edit as they go, meaning they do little more than one draft. But if I tried to work that way I’d never get past the first sentence! I like to get a load of rubbish onto the page and then clean it up later.

What I love the most about writing a first draft is seeing the word count rise. This is the only stage where I always feel like I’m getting somewhere. With editing and plotting it often feels like treading water but a first draft you can see your work developing.
I used to give myself a daily word count target but now I do a weekly one (sometimes 10,000 words, sometimes less) as it’s more flexible. Often the rest of life gets in the way meaning I can’t do enough words in one day but then another day I can do more. Doing it this way means I don’t feel like I’ve failed quite so often. And exceeding your weekly target is the best feeling in the world.

Stolen took about six months to do a first draft but I was working full time at that point. Gone took slightly less. The third book took about ten weeks. Usually the first draft is a hideous state that makes me want to scrap it and start something new. But I don’t. 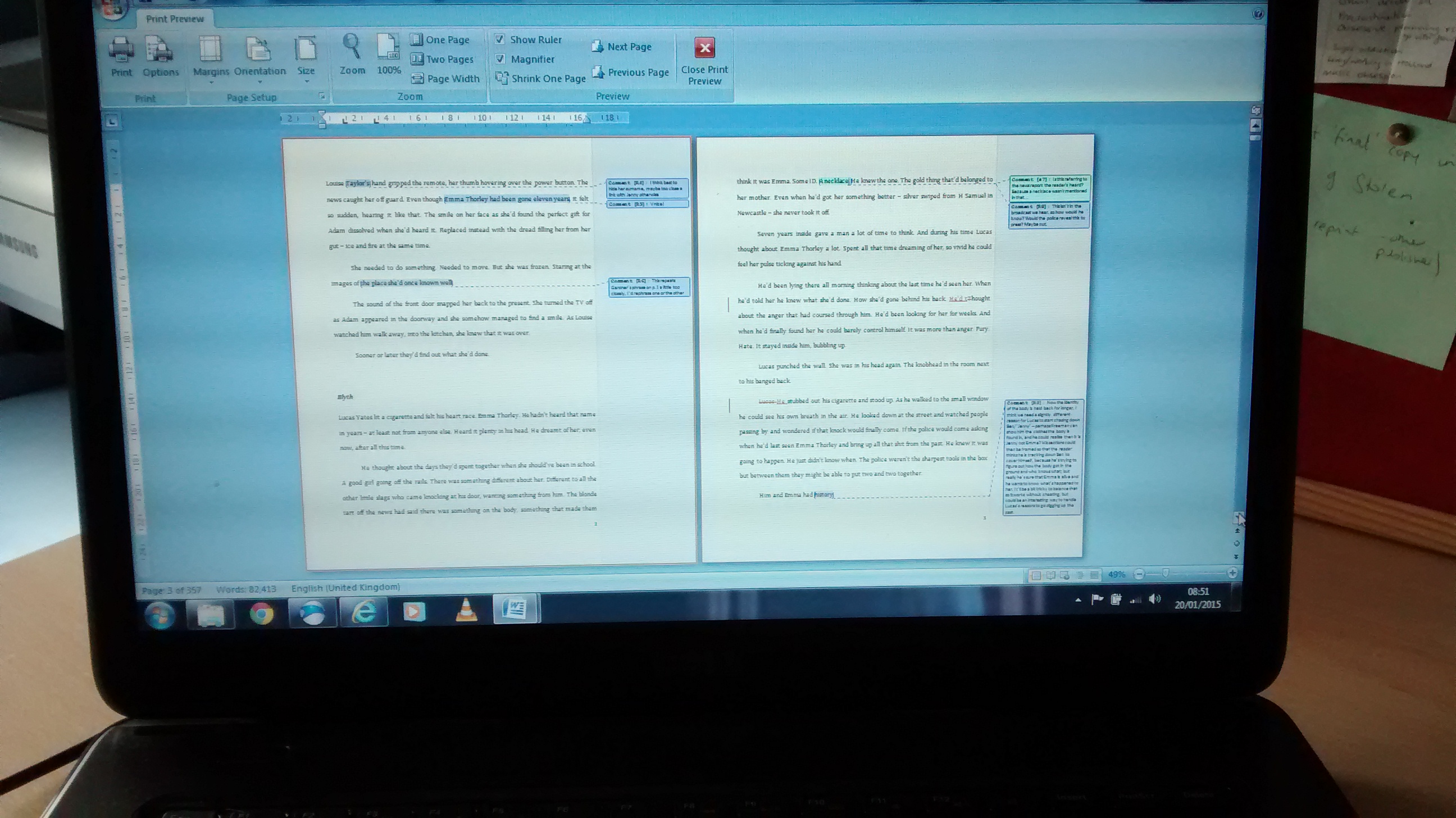 I always used to read through on paper, finding it hard to read on a screen. But now I’m being more environmentally friendly and doing it on the computer screen.

I don’t usually send the first draft off as it’s usually full of awful things. So I read through, make notes and then have another go over it. Sometimes it’s just small tweaks and checking things make sense, sometimes it’s a major overhaul. But once I’m happy for someone else to see it I get my boyfriend to read it and check for mistakes. Then it’s off to my agent, Stan, and he’ll send me notes to work on before sending it to my editor, Ruth.

Thanks for having me! 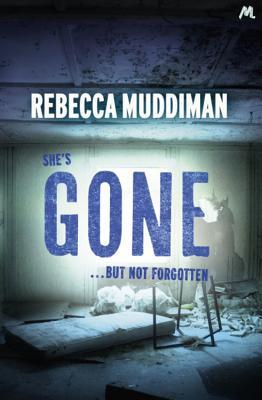 250,000 people go missing in the UK every year. 91% of those reported to police are found within 48 hours. 99% of cases are solved within a year. And 1% stay gone. 11 years ago, troubled teenager Emma Thorley went missing. The police assumed she was a runaway. But now a body has been found in woods near Blyth. DI Michael Gardner knows he didn’t take Emma’s disappearance seriously enough back then, and is determined to make up for it now. But when he and DS Nicola Freeman start to reinvestigate, they discover that nothing is as simple as it seems.

You can find a review of Gone on the Cleopatra Loves Books blog Here.

You can follow my reviews on Goodreads Here. All previous First Draft Q&As are Here.