Today I’m excited to say we have A. D. Garrett on the blog talking to us about her first draft process.

A.D. Garrett is the pseudonym for the writing collaboration between Dagger award-winning novelist, Margaret Murphy, and forensic scientist, Dave Barclay. Everyone Lies, published in 2013 to wide acclaim, was their first collaboration. The sequel, Believe No One, has just been released in paperback. 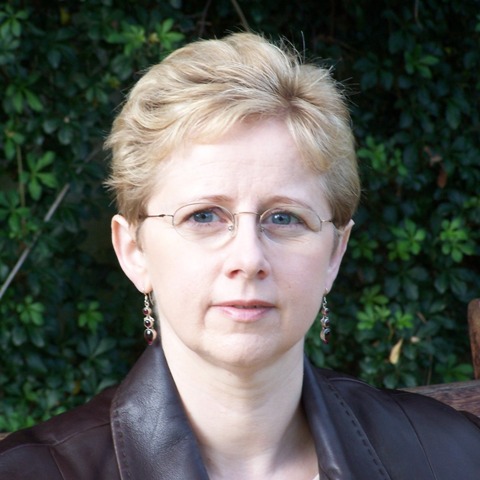 Margaret Murphy has published nine psychological thrillers under her own name – in the UK and the USA, as well as in translation across Europe. She has been shortlisted for the First Blood award for crime fiction, and for the Crime Writers’ Association (CWA) Dagger in the Library; in 2012 she was joint winner of the Short Story Dagger. A former Chair of the CWA and founder of Murder Squad, she lectures on writing and is RLF Writing Fellow at The University of Chester.

Dave Barclay was a senior lecturer at Robert Gordon University, Aberdeen from 2006-2013 and is an Honorary Professor in the Dept of Chemistry at Hull University. He was Head of Physical Evidence at the UK National Crime and Operations Faculty for 10 years, where he undertook physical evidence reviews in 233 murders or murder series.

Buy an A4, wide rule Pukka pad and make sure I have plenty of Pilot gel pen refills available. It’s not superstition – they’re reasonably priced, but with a good paper density so it doesn’t blot the gel ink. As for the pens: they have a thick barrel and a soft grip, which makes for more comfortable writing.

Since I started collaborating with a forensic scientist on the Fennimore & Simms series, I work up a detailed outline, revising and augmenting that until I feel the story and characters have enough depth before embarking on the writing proper.

Both. I sometimes find that the computer screen can be a barrier to creativity, and if I start feeling that way, I’ll retire to my comfy chair with a pen and pad.

Paramount – and not just because the forensic science has to be right. I’ve written nine psychological thrillers under my own name (Margaret Murphy) and right from the off, I did a lot of research. It provides new possibilities by introducing you to situations you couldn’t have imagined, to characters you would not have met sitting at your computer keyboard. Talking to an insider may give you that gem of information which sparks a new way to subvert the evidence, confounding the expectations of your readers and keeping them guessing.

I read – forensic and psychological texts, as well as case studies. There is also a lot of reliable information online if you know where to look – government publications that would have cost a fortune in the past can now be downloaded free, and ACPO and police forces will often have advisory documents and reports available on the Web. Google can be a good source if approached with caution and carefully cross-referenced. But that’s only the start of it. For the first two A.D. Garretts, I called on the expertise of forensic expert Dave Barclay. For future novels I will be working with Helen Pepper, scientific consultant on both the Vera and Shetland TV series, senior lecturer in Policing, and a former CSI and Crime Scene Manager. UK policing is going through major changes, and it will be exciting to have someone who can talk me through them as they happen. Change means conflict, and conflict is great for story! 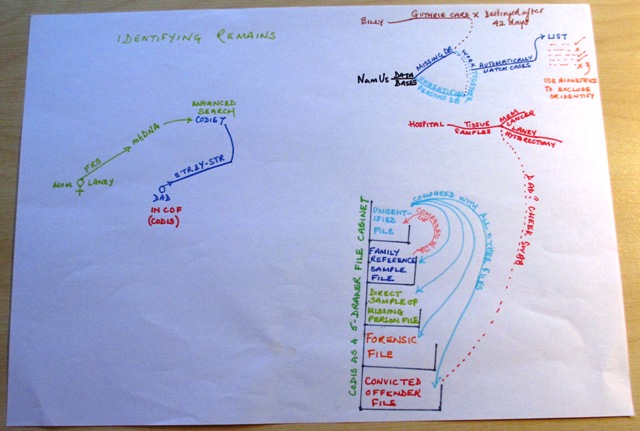 Handwritten scrawl and WORD docs cluttered with web links, plus sketches and mindmaps when things get complicated. For Believe No One I had to mindmap the levels of access to the US DNA database (CODIS) – it’s very different from the UK’s DNADB. I also printed out Google maps for each stage of Interstate 44, flagging body dump sites – and I stuck a grid of the victims and details of their last known movements to a cupboard door in my office. I take lots location photos, though never enough – I’m often too busy absorbing the feel of the place to take shots of what it looks like. 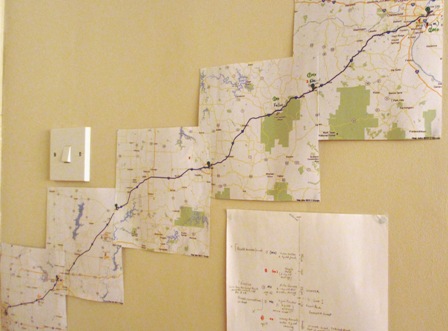 It’s different for each book, but there will always be an outline – the A.D. Garrett outlines involve close consultation with my collaborator who will approve or suggest changes and improvements to the scientific/procedural content. I don’t always write in sequence: if a scene is particularly powerful in my mind, I might write it almost in full, with dialogue and action. Writing Believe No One I followed one character’s story almost to the end of the book, leaving all others aside, and only breaking off when he had to begin interacting with others whose stories hadn’t yet been fully realised. That was a first for me, but I found the process so satisfying I might try it again with book 3 in the Fennimore & Simms series.

No, all I need is time and some peace and quiet.

The reality for most writers is that we need to supplement our writing earnings – check out the Authors’ Licensing and Collecting Society’s report ‘What Are Words Worth Now?’ for more on that. So I teach. I am RLF Writing Fellow at the University of Chester, and in January I’ll be teaching creative writing at MMU. I have to fit in social media, writing articles, updating my website – and running a household, too. That said, when the writing is going well I can easily lose a few hours in my created world. 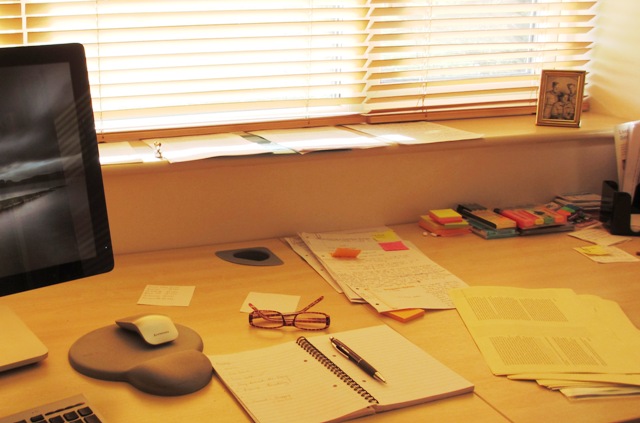 More or less messy, depending on whether I’ve had a blitz. Notes laid out on the window ledge and desk (really two desks pushed together – I was a biology teacher in my previous life, and I like plenty of ‘bench’ space); dictionary; thesaurus; two lamps (like I said BIG desk). I also have a comfy chair for when the computer raises that writing barrier (technically, it’s a chaise longue, but so small it could fit in your pocket); post-its in a range of colours… There’s a picture… 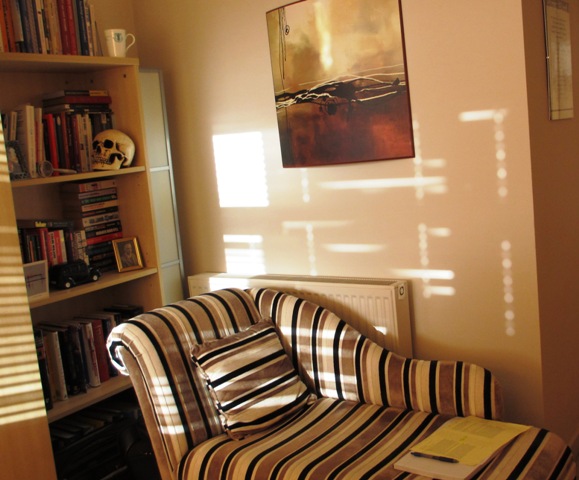 Edit as I go. Usually, I will read over the scene or (rarely) the chapter I wrote the previous day, edit and then continue with the next section. It’s actually a good way to ease into the writing, it keeps me in touch with story, tone and style, and the beautiful lines I preened myself over the previous day reveal themselves as narcissistic gargoyles. When I think a scene is ready, I’ll read it to my husband.

I do word count, on occasions. But it’s only a good thing when you’re writing well over the 500 mark every day – otherwise it’s demoralising. I do try to write every day, though – despite the teaching schedule. Often I’ll edit if I’ve only an hour to spare.

The Murphy novels take about 9-12 months, but for the A.D. Garrett novels it’s more like 18 months. Hopefully, because I’ve been continuously editing, it won’t be too horrible. But it will be too long, and so I’ll try to edit it down by at least 10% – probably more.

Paper – always. Psychological tests have shown that we read more slowly, less accurately, and find fewer errors when reading on-screen – and we tire more easily. So it’s a no-brainer, really. 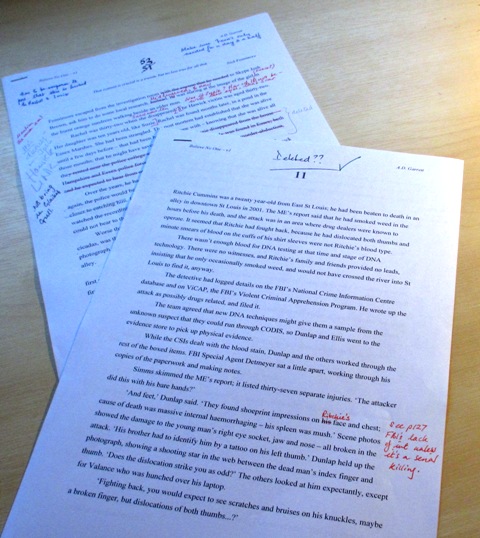 I set it aside for a couple of weeks (it should be more, but deadlines are a beast). Then I’ll read through as far as I can without putting it down, which can bring on symptoms very like seasickness. So I take breaks – but I’ll read the story and only the story in that time. I’ll jot down notes and corrections in the margins, but won’t stop to type them up until I’ve finished the read-through. When the ‘final’ edit is done, I send it to my agent. That is the hardest part, because it means letting go, and there’s always more to be done.

It’s been fun – thanks for asking me! 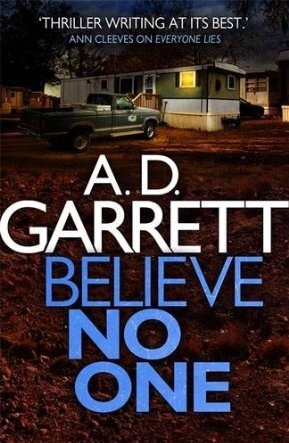