Mishaps and Mistletoe by Tilly Tennant 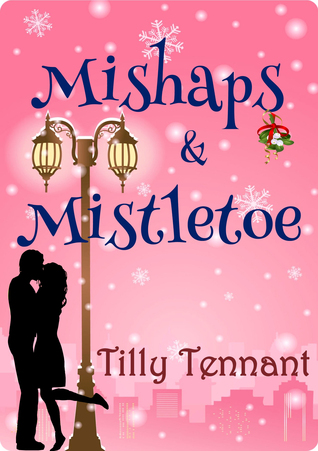 Phoebe has had a terrible year, starting with the death of her boyfriend and ending, three weeks before Christmas, when she’s sacked from her job. The bills are piling up and she’s desperate enough to find herself working as a Christmas elf in the grotto of Hendrick’s Toy Store. As if the job description isn’t bad enough, Phoebe doesn’t like children. There’s nothing wrong with them, they’re just not for her. Neither is there any escape from a boss whose only language is sarcasm, and an alcoholic Santa.

Then one morning Maria comes into the grotto – a little girl unlike any she has met before. Phoebe doesn’t know it yet, but Maria and her dad are about to shake her life up in ways she could never have imagined…

I like Tennant’s writing style and I could sit all day and read her books and this one was no different. Mishaps and Mistletoe is a short Novella at only 60 pages and I ended wanting more.

There isn’t a great deal to say about the story itself, that isn’t in the blurb as it’s such a short story form, but we follow Phoebe as she starts her new job in the store as Santa’s helping elf. The descriptions of her hatred of the elf uniform and Santa just set the story and her character up perfectly.

If you want to spend an hour in a perfectly lovely and Christmassy way, then this will do the trick.

This is my second Christmas story I’ve read so far this year, after not usually reading any. The first being the crime book club’s The Ho Ho Ho Mystery by Bob Burke and now I’m reading Dying For Christmas by Tammy Cohen, so expect to see that up on the blog next!

To keep up with what I’m reading, you can find me on Goodreads.

Have you read any Christmas novels this year? Is it something you tend to do, or tend to avoid?