The Defence by Steve Cavanagh 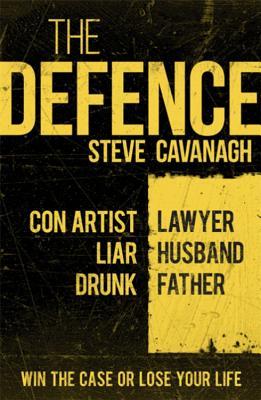 Eddie only has 48 hours to defend Volchek in an impossible murder trial – and win – if wants to save his daughter.

The book starts straight in the action as any good book should. It lets you know Eddie Flynn straight away by how he deals with this. You’re in his head as he figures things out and I liked that. The head of the Russian mafia want Eddie to represent him in court on a charge of murder and Eddie doesn’t get a say in it as a bomb is strapped to him and they prove to him they already have his daughter.

What I liked about the kidnapped daughter effect was how Cavanagh finely sliced in the back story of their relationship. It gave meaning to me as a reader as to why he would fight so hard, and gave more insight into who Eddie was, rather than just having the daughter as a prop, an automatic person we would all fight for.

And fight he did. In his own way. As a con man and a lawyer. The scenes where Eddie is in court being the lawyer were my favourite. They were fantastic. If I am ever in serious need of a lawyer, I want Cavanagh to come and represent me. He is sharp and fast. So fast, at one point I was actually laughing out loud. Scrap that, I think it would be classed as cackling, especially with what I was laughing at. And if you wonder why I’d want Cavanagh to represent me, just look back at his First Draft Q&A that he did and you will see he is actually a lawyer by day and that is abundantly clear in this novel. He knows his stuff and it’s clean and crisp. But it’s at no detriment to the story which doesn’t just stay in the courtroom. Because the trial covers several days there are opportunities for Flynn and co. to leave the building and try other ways of ‘winning’ the trial and saving his daughter’s life.

It’s a book you’re not going to want to miss. I finished this last night and ended up dreaming of kidnapped children. That’s how good this book is. Unfortunately, it’s not out until 26th March, but I’d go and put it on your TBR if I were you.