Last Thursday I was in London to see Professor Grahame. A top specialist in the field of Ehlers Danlos Syndrome. I was there because I was at the end of my tether, running out of hope and he was my last chance at getting to the bottom of what is disabling me so much.

You may remember a post back in September where I explained that I have a problem with my neck/head joint and with that I get a lot of extreme neck pain, crippling headaches, debilitating fatigue and a myriad of other issues. It now controls my life. I can’t do a day without pacing myself. I can’t go for a weekend away without being a medical mess afterwards. Professor Grahame really was where I was pinning everything, my whole life was stacked up in his hands. I was so invested in this appointment the day and night before I was a gibbering wreck and couldn’t sleep. Those of you on social media will have seen me up and active, way past my usual activity time.

The appointment came and I rambled (I also cried.) This was so incredibly important. But he listened, he asked questions and he examined me thoroughly. Professor Grahame actually lifted my head up higher with his hands and asked how it felt and it felt ok. Then he let go and my head just dropped like a brick back down into my neck. He asked how that felt. There was pain in my neck that had run up the back of my head as it had dropped.

At the end of it there is now an answer. An answer and action being taken. It would appear that the craniocervical junction is unstable which is what is giving me a lot of my symptoms. My head is too heavy for my neck. It’s known as bobble head. Or to put it in image form, my neck is a cocktail stick and my head a pumpkin and the stick is attempting to hold it.

The Professor is going to give my MRI to one of the top neurosurgeon’s in his field, in America, and ask him to look at it and do the official measurements, to see if it falls within surgical limits. He’s going to write to my GP to update him as he’s responsible for my day-to-day care. He has also said I need to wear an aspen collar to hold my head. This is the aspen collar. 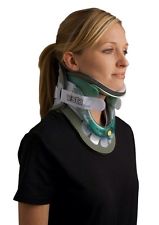 Flattering isn’t it?! I’m now in the midst of a scarf buying spree. Everything I wear will be accompanied by a scarf. Though looking at this again, I’m not sure they’re going to help much.

I did cry again when the Professor said all this, and he was shocked that I’d thought he wasn’t going to help me. It’s been such a battle as the NHS ortho and neurosurgeon’s don’t understand EDS and the impact it has on their respective areas that they don’t look, well, they don’t even listen, and to have it all in Professor Grahame was such a relief.

Now the impact of what this means to me is setting in a little and the joy of being heard is being replaced by a quiet contemplative understanding of just how fragile my body can be and what this current issue really means.

I am still pacing myself though and writing is something I can still do in spurts, so don’t think this is a setback in any way. It’s an answer. I just need to adjust my life…