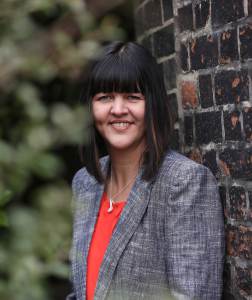 Ever since Mel can remember, she has been a meddler of words. Born and raised in Stoke on Trent, Staffordshire, she used the city as a backdrop for her first novel, TAUNTING THE DEAD, and it went on to be a Kindle #1 bestseller.

I write down the thought I’ve had to kick-start the idea, and the few sentences that come from that. It can be a line in a song that gives me an idea or an article headline or a track on an album that gives me a title.

Yes, I write a few paragraphs around it. Then if it’s a number of sub-plots, I’ll bullet point them. I’ll then merge the ideas together into another bullet point list and try to get a rough beginning, middle and end. After that, I try to make about twenty chapters from the bullet points. Then I’ll begin. Those chapters eventually end up doubling in number by the end of the final draft.

Pen and paper for the original idea but then straight to keyboard after that.

It isn’t until after I’ve written the first draft – unless I am writing about a particular subject that needs research first before I start. For instance, I often write scenes that involve the police and then have them checked by people in the force to see if they are ok afterwards. But if I have a character who self-harms and it’s part of their make up, I’ll do the research first.

Good old Google first – then books if I need more lengthy detail. I’ll also meet people who can give me the information I need. Often I can glean more from a coffee and a chat that I can through doing hours of research online trying to find something useful.

Everywhere and anywhere – and then I can never find them when I want them! If it’s really important, it’s on my desktop in the file with my latest WIP in it. That tends to get quite full towards the end of the final draft.

At the beginning when I’m getting down the ideas and plots that I’ve thought of, I also open a file for anything I think of that could be used in the second draft and pop it in there. I don’t stop once I’ve started the first draft so I look at these ideas after I’ve finished. And when I’ve written ‘The End’ that is when the work starts. I do three drafts before I show anyone what I’ve written.

I always have to buy a new notebook. I think that has more to do with the fact that I’m a stationery freak really. But I do like the process of choosing one knowing that I’m about to start a new project. It’s a must.

I do tend to go to ground when I draft or rewrite. For some reason, I have to do it quickly and then let it rest. So I’m not one to moan if I’m interrupted but ultimately if I want to write fore several hours in a day, then nothing else matters. Selfish, but I can’t do it any other way. It’s as if the whole book consumes me until I’ve reached ‘The End.’ 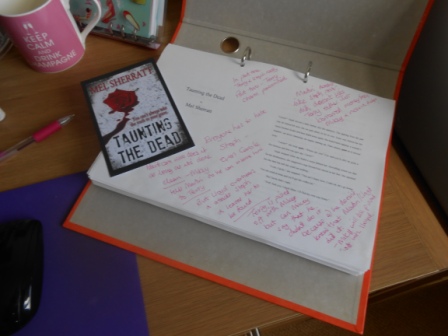 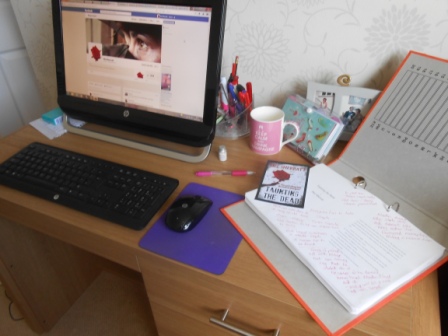 Just get the words out. If I stopped to edit, I don’t think I could allow myself to waffle. Waffle on a first draft always leads me to writing the scene I really wanted to during the second draft.

I use a Word document with a three row table. I add the date, the word count for the day and then have an overall total word count. Very simple but I find it very inspiring as I add to it. And a push sometimes when I don’t!

It takes about six weeks for me and, well, it has a beginning, a middle and an end. It also has a lot of gaps, research required, checks, inconsistencies, waffle, often new characters to add etc. But hopefully it has a lot of possibilities.

Before I had my Kindle, I would always read it through by printing out each draft as I go. But now I only do this for the first draft. I scribble ALL over the first draft so when I’ve added everything into the second draft, then I’ll upload this to my Kindle and write notes alongside reading it back. I’ve really enjoyed having the Kindle for this purpose.

I read it back in full and try to make sense of what I’ve written – or what I want to write from that. And then I look in my ideas file and marry the two together. Once the second draft is done and I’m feeling happier with the story as a whole, during the third draft, I’ll concentrate more on getting facts right, adding more description and an extra layer of fear and emotion if possible. Once the story is down in full, I find I can concentrate more scene by scene with the tiny detail required.

If you want to answer the First Draft questions, please just let me know and we’ll sort out a date!