Today in the First Draft hot seat is YA author Sharon Sant.

Sharon was born in Dorset and divides her time between working as a freelance editor, holding down a day job, and writing her stories.  An avid reader with eclectic tastes across many genres, when not busy trying in vain to be a domestic goddess, she can often be found lurking in local coffee shops with her head in a book. She loves nothing more than watching geeky TV and eating Pringles. She is the author of several books including The Sky Song Trilogy and most recently a Dystopian YA, Runners.

That depends on where I am. If I have a cracking idea, you can usually bet I’m in the supermarket queue or driving to work at the time – somewhere where it’s impossible to begin anything. If I’m home, I get straight on the laptop. When I’m out I always have a notebook with me so I’ll scribble in there. If I’m at the office in my day job, I’ll email a plan or first paragraph home to myself. Wherever it is, most of my ideas come with a first line or paragraph which I’ll write out and then start to plan the rest of the plot (which will always be fairly vague at that point).

Again, it depends on where I am at the time. I will always have the loosest outline or even just a premise or a scene to start with and everything follows from there. I always aim to have the strongest opening I can and that’s probably about the only concrete thing you’ll get from me at this point!

I can type much faster than I can write and my initial thoughts are always at the speed of light so I have to type if I can. I only write by hand if I can’t get to a computer but I find it frustrating because it just won’t be fast enough.

It depends on what the project is. Sometimes I need to describe a location accurately and I will research, but with my fantasy locations that’s not quite so necessary. Recently I began work on something historical and I did some research for that, but rather than it being bogged down with detail, I simply wanted a flavour of the era so I didn’t do lots and lots.

If it’s a location I need to research and I am able to get there I will go and look around, make notes and take photos. If I can’t then I’ll go online and look at it but I’m never happy relying on this because things often look very different in real life. For Runners I had to work out a lot of travelling times and distances between towns so I printed out loads of maps and sat measuring them with rulers. Likewise, for The Young Moon I needed to know train times and connections for a real location but I found all these on travel websites. For other things I quite often go to the local second hand bookshop near my house and pick up cheap books; I’ve been known to use the university library too.

I bookmark on the computer or write notes and print out pages to stick in my notebooks. My old notebooks are crammed with loose maps and timetables! 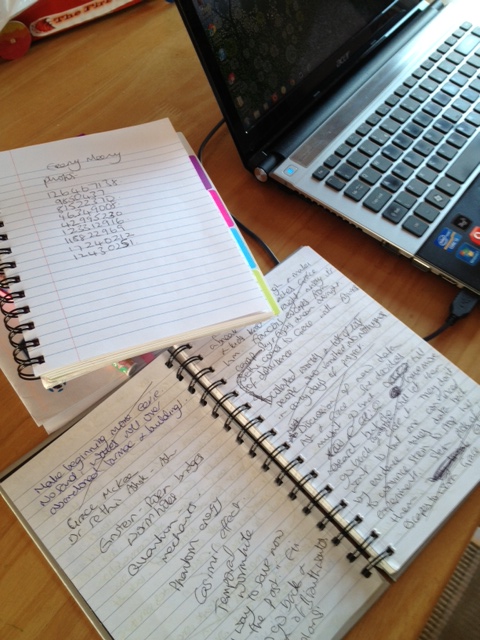 It always starts with a first paragraph that has popped into my head. I tend to hammer at it and try not to stop until it’s done, and much as I want to edit as I go along, I don’t. I know that if I have to leave a book mid-draft, it’s very hard for me to pick it up again so if I don’t get through it first go, it’s likely it will never be finished or it will wait for literally years before it is (I have a half-done first draft on my laptop that I began in 2008). Once the story is down, then the luxury of editing can come.

I need a window to look out of and a lot of tea. I graze a lot too, but trips to the kettle for tea and food are more for movement than because I need them; when I’m stuck it helps to get the mojo working to get up and potter about the kitchen. I usually find that I’ll come unstuck then and get back to it.

I very much inhabit the world I’m creating, to the point where I can’t actually communicate with my family and friends, and I’ll be like that for weeks – driving to wrong places, burning food and completely forgetting arrangements. If you’d asked me what my name was when I was writing Runners, I probably would have told you it was Rosa.

I’d love to say that I have a fabulous summer house at the bottom of the garden, but in reality I have a corner of the dining table or a tub chair in the bedroom. Sometimes I get the luxury of the university library, coffee shop or post-grad office, but that’s not often as it means packing up and shipping out of the house which is just a pain.

I have to keep writing, if I stop to edit, I usually lose the thread of the story and won’t finish the draft.

I have a word count facility as I work in MS Word. I try not to look at it too often though or I can become more obsessed with that than actually writing.

Depending on the novel and my other life commitments, it can take anywhere between 4-12 weeks. It will usually need at least 3 re-drafts and then a couple of edits. Even then I’ll go and tweak bits as I think about them and that can go on for weeks too.

I use the computer screen for the first few drafts, then when I’m happy with those I will line edit and proofread from my kindle – I just feel like everything looks much clearer on there.

I sit and hate it for a few days! Then I take another look and decide it’s not as bad as I thought. I try not to start editing straight away as I know you’re supposed to give it some distance, but sometimes I just want to dive right in! I’ve been known to start a new first draft in between first draft and edits on a previous project. I did that with the second and third books of the Sky Song trilogy as it seemed like a good idea to capture the story as it progressed in my head, in much the same way I’d tackle a standalone novel. Of course, editing is next and though some people hate it, I love it. This is the bit where your lump of coal can become a diamond and that process is very exciting, which is why I think I enjoy editing other people’s novels too.