Well, Friday proved to be an eventful day at the festival. It has been a long day and as I think about it, it’s hard to believe it was all in the same day.

Thursday night I realised disaster had struck and I’d managed to pack everything but my prescription strength pain pills. I was mortified thinking I had to drive home again. But thanks to great advice on Twitter, that said disaster and my failing to make it through the first full day, was averted. 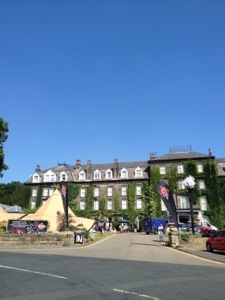 The day was a complete scorcher. The festival had been blessed not only with sunshine but the complete inability to retain bodily water as all festival goers fanned and hid under trees or complained of melting into the seats during panel talks. Apparently the massive electric fans they had in the room made too much noise so had to be switched off while actual people were crowded in their hundreds into the talks room.

Other than one talk, I was safely ensconced under a massive tree hiding from the vivid ball of gas in the sky.
> 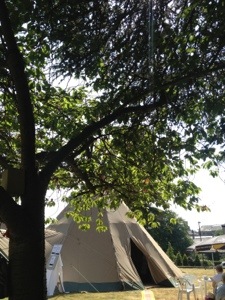 The one talk I went into was the Social Media: Who Are You talk.
The blurb for this – lifted from the website is – Do you dream in hashtags? According to the government’s Chief Scientist, the web is redefining human identity, changing people’s views of who they are and their place in the world. It’s an addictive but questionable force. So how do authors navigate these virtual choppy waters? Are they just procrastinating on Twitter? And what becomes of fragile egos in the hands of ruthless online avatars? Explore the fine line between social media success and social media suicide.

What it really was, or what it turned into after about 20 minutes was Leathergate all over again. It degenerated badly. There were too many personal feelings involved. Too many people with passionate beliefs in certain things, and I think it needed to be remembered that this event was open to readers as well as writers and book bloggers, and readers who may not know or care about this personal stuff but wanted a talk on social media and if its worth doing.

It got a level down from bad when an audience member stood up as a friend of Leathers to defend him as he couldn’t do this himself. This didn’t go down well and it wasn’t long before another audience member was given the microphone to have a dig at the first one for his comments, saying he had only said them because Leather blurbed his new book. – Well yes, he did say they were friends. That’s why he defended him.

It was a bit of a bitch fest. Very off topic and I left before it ended.

I lunched with friends, chatted, ate ice-cream, drank wine in Harrogate, did lots more relaxed chatting with friends including the really lovely Jane Isaac who came to Harrogate for the day.

The final note of the day was entering my hotel room at just after 1am and finding the light switch next to the door didn’t work anymore. The crime writer in me of course didn’t think a murderer was waiting for me in the bathroom. That is unless you ask @Octaviagrey! Oops.

Here’s to another busy but wonderful festival day tomorrow.