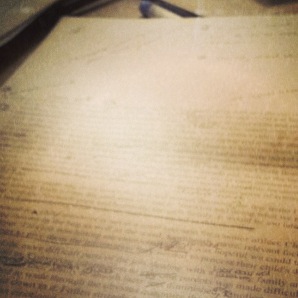 A couple of weeks ago I saw a tweet sent out by crime writer @stavsherez that sparked a new idea for the blog. Stav tweeted a photograph of a heavily edited document which he stated was his first draft. Not only did I think first drafts were a great topic, I thought it was a topic I could work in as a regular slot.

As writers we all work differently. Some writers hate doing the first draft and struggle through it, others love the process. Some edit as they go, some writers just put anything that is in their head onto paper and work it out from there.

I’m in that second camp. I feel that my first draft is utter drivel but I like working with it, once it’s down. I have a skeleton with which to work and and I go from there.

What I did find interesting about Stav’s tweet, was that he was willing to tweet a photo of his heavily scribbled on work.

So, on that note, I intend to have a proforma set of questions all around that first draft. I want a deep and meaningful about where these drafts come from, and where the writer digs down to get them from. I want to know the state of their working environment. I want all the messy stuff.

I also think having a set of questions for something like this will prove quick and easy in the organisational stakes.

I hope to be able to do this with, traditionally published writers, independently published and those still on their work in progress.

It requires a bit of honesty and a photo of either a very scribbled on hard copy document or messy desktop/desk/post-it’s etc. We want to see your very soul!

I’m off to think of deep and meaningful questions. Let me know if you would be interested in having the first draft questions.

I’m looking forward to seeing how writers do things differently!