So, today I want to welcome to the blog, YA author Sharon Sant. 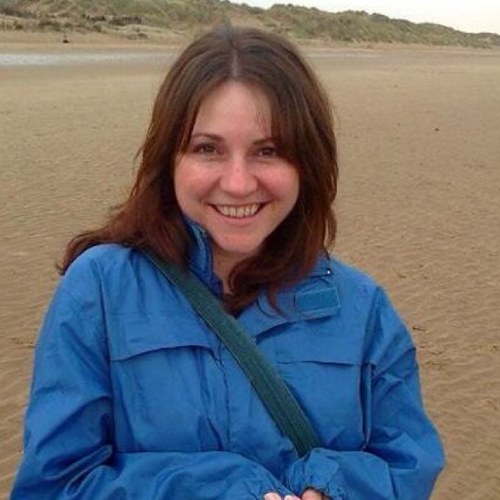 Sharon was born in Dorset but now lives in Stoke-on-Trent with her husband and two children. She graduated from Staffordshire University in 2009 with a degree in English and creative writing, and currently divides her time between working as a freelance editor and writing her own stories. She’s an avid reader with eclectic tastes across many genres, when not busy trying in vain to be a domestic goddess, she can often be found lurking in local coffee shops with her head in a book. Sometimes she pretends to be clever but really loves nothing more than watching geeky TV and eating Pringles.

So Sharon, you have recently released your second book, The Young Moon, which is part of a YA fantasy trilogy. I have read both Sky Song and The Young Moon, and loved them both! Your website states you have eclectic reading tastes. What made you want to write YA?

I can’t honestly say why I write mostly YA. It just seems that whenever I put my fingers to keyboard for something new, I tend to imagine the main character as a teenager. Somebody asked me to name my favourite three books the other day, just off the top of my head I came up with three very different books – Oliver Twist, The Book of Lost Things and Harry Potter. On the face of it, they don’t have much in common, but then I realised that they do – they all have a teenage boy as the protagonist. I must just connect, somehow, with that age group. I probably haven’t left it myself in my head! I think there are new horizons opening up, things that are allowed, mistakes that can be forgiven for people of that age group that the rest of us aren’t afforded the luxury of, and that presents fantastic possibilities to write. I remember how overwhelming but exciting life seemed when I was in my teens and maybe writing it brings that back for me.

I think it’s because I have read your books, that I have started reading YA myself and you’re right, the possibilities in the books are great. When I’m writing crime fiction, there is always someone to answer to, to be responsible to and for. YA is completely different. Tell us a little bit about the protagonist in the Sky Song trilogy and about the inspiration for him/ how he evolved for you?

Despite the fact that Jacob came from my head, I find him a difficult character to sum up. He’s an academic high flyer, though he doesn’t want to be. He’s attractive in his own quirky way, though he doesn’t really know how to deal with the attention that it brings. Aware that he is one of life’s outsiders, all he really wants is to fit in. He has grown up not really knowing who he is. So when his destiny is sprung on him one fateful night, all these things suddenly start to make sense. I adored writing him, because he is so complex and lots of people tell me that his personality is one of their favourite things about the book. One review I read recently said he was using the ‘how to be an idiot handbook’ and that made me laugh because, quite often, he does mess things up.

He actually started out in my head as a young girl! There’s some interesting thought processes for you! I can’t exactly remember the point at which he became Jacob, but the story had been rattling around in my head for a good year, and every time I thought about it, something wasn’t quite right. One day I just wrote this teenage boy (I found an old memory stick the other day, and on it he was called Pablo, which is a bit random!) and I instinctively knew which story he belonged in. Usually I get one character in place and the others seem to follow quickly and Sky Song was no different. Because Jacob’s personality is quite intense, I knew that he needed a foil, and that’s where easy-going Luca came from. And there has to be a kick-ass girl, of course, so along came Ellen.

Wow, that sounds a complex and quite convoluted way of getting a character together. Can you tell us, are you a plotter or a pantser?

I think I’m a bit of both – a plontser! I have a starting point and a vague idea where I want to end up, with events that I want to happen along the way. I sort of join the dots from there. I’m very much a lightbulb writer, so I’ll have a flash of inspiration, start writing straight away, maybe a first chapter, a few scenes, then I might get stuck for ages because I don’t really know where it’s going. So at any one time I might have half a dozen or more of these works in progress. Sometimes they sit for years and one day I’ll just know what to do with them. That happened a couple of days ago, I had a 15k piece that had been sitting on the laptop for 2 years because I just didn’t know where to take it next, then I saw a photo of something online and BOOM, the solution came to me and I’m working on it again now. Brains are very weird things!

Do you have your own writing space at home and can we have a photo of where you write please? 🙂

Sadly, there’s no spare room for me to have an office but I have claimed a corner of the dining table for my own. Trouble is, the dining room and living room are connected so often there’s other stuff going on. If I need to really concentrate, I take myself off into the bedroom with the laptop.

Ahem… I might have tidied up a bit for the photo…

What do you need with you, to make sure you sit down and write? And what is your biggest distraction?

I need lots of tea! As long as I have a constant flow I’m happy. I quite like a window to look out of too. That sounds weird, but sometimes sitting and staring and letting my mind float away helps solutions to plot issues to pop up. There are lots of things that distract me. I do really need a very quiet place, especially when working on early drafts, so I can immerse myself in the world I’m trying to create. Social media is a problem, if my phone pings for Twitter I just can’t help running off to get it!

What a cruel decision. I love Pringles; it says so on my bio! But I’m partial to a bit of chocolate every now and again.

The most boring answer I could give, but it has to be tea.

When can we expect the final part of the Sky Song Trilogy? I just can’t wait!

Aww, thanks, neither can I! I’m aiming for early May, mostly because I’m going on holiday during the first week and I want to get it finished before then! That’s one of the big perks of self-publishing; you can set your own deadlines!

Thank you for taking the time to answer some questions, it’s been great having you here, and I’m looking forward to May and the release of the third chapter of the trilogy.

It’s been lovely to be here. 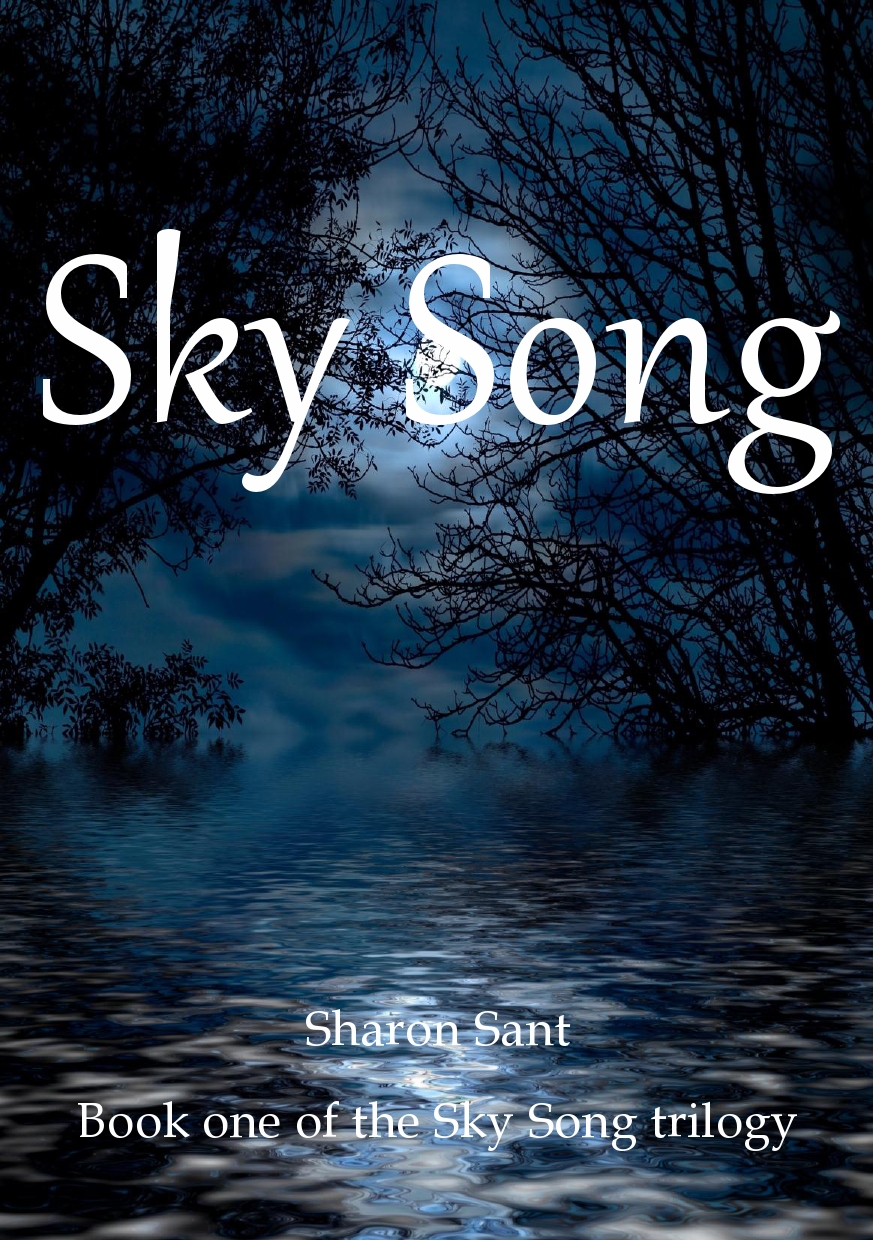 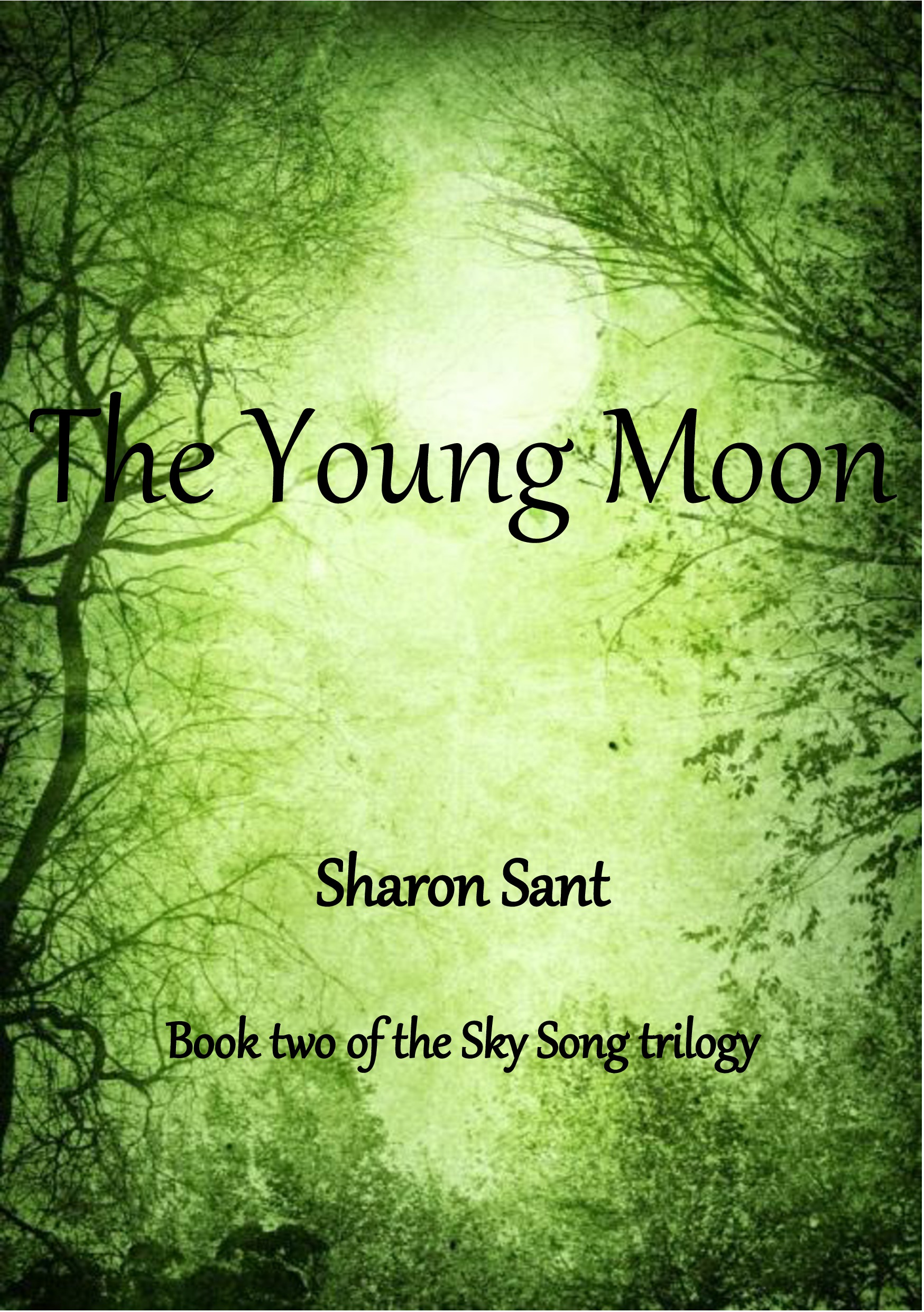 ‘It is a prophecy, Watcher. And it foretells your destruction.’

So comes the stark warning from Astrae. But what does the prophecy that tells of the young moon actually mean?

Two years have passed and Jacob’s search for the second Successor brings him back to Earth. But his Watcher powers seem to be useless as the other Successor remains shrouded in mystery… And he soon discovers that his bitter uncle, Makash, is also hot on the trail.

Jacob’s quest takes him and Luca halfway across the globe in a race to get to the other Successor first. As they get closer to their goal the body count starts to rise and Jacob and Luca are dragged deeper into Makash’s deadly game as the net closes around them.

All Jacob has to do is cheat death, yet again, find another like him amongst the seven billion people that swarm over the face of the planet before Makash does, and thwart the prophecy that spells his doom. No pressure then…