The Recently Read posts are not book reviews. As a writer, I do not believe I should be reviewing the hard work of other writers. These posts are simply books I have recently read and enjoyed and will share with you. They will not always be crime books as I am trying to widen my reading selection. I hope you enjoy some of these with me. 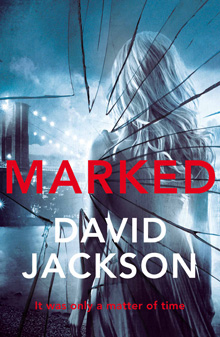 Her tattoo wasn’t just a mark for life; it marked her for death too.

In New York’s East Village a young girl is brutally raped, tortured and murdered. Detective Callum Doyle has seen the victim’s remains. He has visited the distraught family. Now he wants justice. Doyle is convinced he knows who the killer is. The problem is he can’t prove it. And the more he pushes his prime suspect, the more he learns that the man is capable of pushing back in ways more devious and twisted than Doyle could ever have imagined. Add to that the appearance of an old adversary who has a mission for Doyle and won’t take no for an answer, and soon Doyle finds himself at risk of losing everything he holds dear. Including his life.

As recently posted, I was extremely lucky to receive an early copy of Marked which was only published yesterday. It is the third book in a series featuring protagonist Detective Callum Doyle based in New York.

I know Dave through attending the Harrogate Crime Writing Festival over the past couple of years. The first year I went I knew I’d be meeting Dave as a few of us had been chatting on Twitter, so I thought I’d read his first novel Pariah before going. Well, that was it for me, I’d found myself a really great American based crime series to follow. I loved Doyle, his wit and the great pace and emotional insight he provided as he fought against the bad guys and also against some of his colleagues as past history and rumours rumbled around him.

Marked, in comparison, as a third novel, has a slightly different feel about it. You can tell Jackson has found his real comfort level with the characters and his writing. It’s sure and solid. It also has some of Doyle’s wit, but the difference is, the book is a bit darker. Doyle is not only fighting against the bad guys, he still has the internal police department rumour mill to fight against, but this time he also has to face himself at a completely different level than before. The bad guy is kickass bad and this challenges Doyle to unexpected levels leaving you never sure what the resulting ending will be.

I started reading Marked in the week running up to Christmas, and as you know, things get busier, more hectic and more tiring in that week. I was initially reading only a few chapters at a time which isn’t how I like to read. What I prefer is to really get into a book and immerse myself. However, I picked it back up Christmas Day evening when it was time to wind down and relax, and I couldn’t put the book down until I finished it. And I did. It was breathtaking. I couldn’t turn the pages fast enough, though at one point I did have to look away as I was so engrossed, the imagery Jackson created freaked me out a little. It is definitely a book that will have you on the edge of your chair. If psychological, nut job bad guys,  not clear-cut good guys, and edge of your seat crime fiction is what you like, then this is your cup of tea. If you want to relax and the world to look rosy, I’d advise you not to read this.