Last night I attended my very first book club meeting at Broadway Books, run and hosted by the lovely and knowledgeable Pam McIlroy, also known as @pamreader on Twitter. I first met Pam at the Theakstons Old Peculier  Crime Writing Festival at Harrogate last year and have kept in touch with her over the past year and enjoyed another weekend in her company at the festival this year. Though saying that, she knows so many people, I didn’t actually see that much of her this year!

Anyway, back to book club. I went with fellow Tweeter @sadielgreening and met for the first time, another tweeter I have been chatting with recently, @EMAldred. This is always nice when you get to put a face to a name a to conversations you have been having. Both Sadie and Elaine are great and I suggest you check them out and maybe give them a follow.

Walking in to the meeting felt a little awkward as Sadie and I were about five minutes late. We had both come to the meeting straight from work and had attempted to get something to eat before heading in. We didn’t have as much time as we thought we had. Our tardiness could also have had something to do with the circles we had driven in while attempting to find a parking space!

The walk in to the meeting room was amazing. It was like walking into some bizarre crime 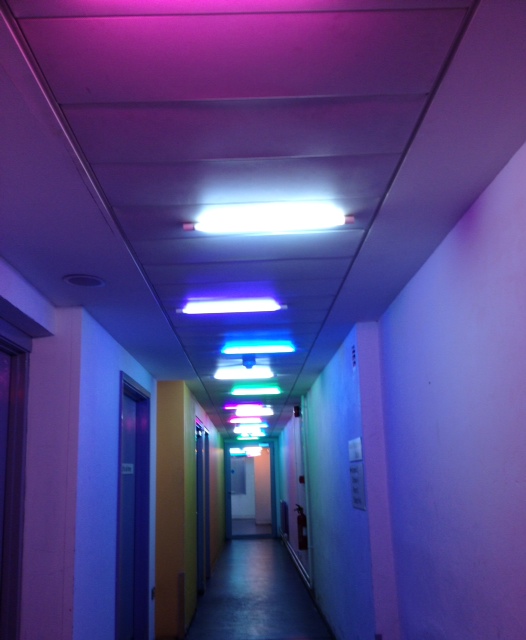 fiction novel setting. The club is based in a cinema complex building and to get to our room we had to walk down a long corridor lit from above with multi-coloured lights. It felt a little like we were going to walk in to some red velvet room at the end, with a couple of cold corpses waiting for us to discover them. It was brilliant and I just had to take a photograph!

I didn’t feel awkward for long though. Broadway Books is an active group and the members are lovely. The meeting started and everyone had an opinion. What was great, was that everyones opinion was valid and heard. Reading is subjective and this was completely acknowledged here. No one spoke over anyone else, there was room for everyone to be heard.

I hadn’t read this months read, The Somnambulist, by Essie Fox as it was a fairly late decision that I was going, but it was interesting listening to the club discuss their thoughts and feelings on reading the months choice.

Having never been to a book club meeting before, I have to say, I thoroughly enjoyed the experience. The people were friendly and chatty and are obviously passionate about books. It’s great to find, and be amongst a group of people who understand my own love of books. Admittedly my reading range is a little slim, but by continuing with the club and reading the monthly, voted for choices, I will widen my reading horizons and sample some of the other great books out there rather than just crime fiction and chic lit which I have tended to stick with.

Next months already voted read is East of Eden by John Steinbeck.

I am hoping that Pam will do a guest blog post for us in the future, to include, what drove her to create such a group and to tell us about how it has grown and flourishes.

Do you attend a book club and if so, what do you get out of it? For me, I know I am going to find myself reading some great books, I may not have otherwise read.

If you haven’t attended a book club before, do you know if there is one in your area? Would you go? You might be surprised how much you enjoy it.