Welcome to Life in Clarity Rachel and thank you for agreeing to do this interview.
Your first novel Storms Heart has recently been released by Embrace Books. How long have you been writing prior to being accepted by a publisher?
I started writing seriously about five years ago. My first novel took a year to write in the few hours I had while my youngest was at pre-school, so my first submission was four years ago.
How did the idea for Storms Heart come about?
I’m sure it’s against one of those ‘rules’ you read about when you’re starting to learn your craft, but location is very often my starting point. In Storm’s Heart, the action begins in London, on the London Eye in particular. I was lucky enough to be invited to a champagne reception on it and the same year, I went on holiday to the main location of the book, historic Lindos, Rhodes.
I wasn’t just inspired by the age and architecture of Lindos, but also by the Greek Legends associated with it; particularly Helios the sun god and his demi-god son, Phaeton. A salutary tale of what can happen if you don’t do as your father tells you. A fiery battle of disobedience and death. This sowed the seed for my character Andreas Lazarides and gave me two different worlds to smash together for an initial conflict.
Layered into this, I came across a poignant newspaper article about General Sir Mike Jackson’s son Mark Jackson, who reinvented himself after injury forced him to leave the army. He gave his sculpture of a lifeless Icarus his own scars. Without giving out any spoilers, this inspired me towards Andreas Lazarides’ dark secret.
I’ve also been a member of Amnesty International for many years which has raised my awareness of many issues and problems that rarely make the daily news. Storm’s Heart scrapes the surface of one of these and forms some of the back-story for Kizzy Dean and Andreas.
How did it go from your unseen work to published book for all to read? It’s a process many of my readers will be interested in?
Ah, now this is going to be an interesting one to answer. The first chapter of Storm’s Heart was originally a competition entry for a well know publishing house (it had a different title) and while waiting for the results I carried on and finished writing the whole book anyway. I didn’t place, but I was asked to send in the following two chapters to a named senior editor. Woo hoo!
I waited TWENTY SIX weeks (I did chase after twenty!) only to receive my very first form rejection. I’d always had some sort of feedback before, so I was completely gutted.  And then I got a bit cross- it was a good book!. And then came a call for submissions from Embrace Books. I subbed and a few days later I was asked for the rest of the book . On day seven, I had an email to say that Embrace books would very much like to publish Storm’s Heart!
The offer was in July 2010, and Storm’s Heart was published as a launch title for Embrace Books on February 14th 2011. There was a lot of hard work to do in those seven months though!
How much input do you get with the cover design of a published book?
With Embrace I was asked to provide details of the characters/location for the cover and to suggest a key scene from the book. I don’t think this happens with all publishers- you get what you’re given and sometimes the covers bear no resemblance to the story. I was delighted with Storm’s Heart though – just gorgeous! 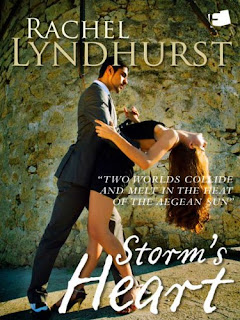 How did you feel on publication day?
I’d like to say euphoric, over-the-moon, all that sort of thing, but where Embrace was being launched at the time there was so much happening I had no time to bask in the wonder of it all. It was more than hectic for the whole of launch week. The most emotional moment for me was when I go the offer email in July actually. I was at home alone with the children at the start of the school holidays and after screaming a bit, I cried. It was a dream come true.
Can you tell us what you are currently working on?
I’m currently working on another contemporary romance, this time the hero’s a gorgeous Italian. I hope my editor likes him – she’s not seen him yet!
When you’re not writing, what genres do you like to read?
I enjoy lots of different things, so it’s probably easier to say I’m not massively into crime or thrillers. I read The Daily Telegraph every day without fail as well – an endless source of ideas and inspiration.
Do you have a favourite book and if so what is it?
That is SUCH a hard question! I’ll have to say George Orwell’s 1984, because it changed the way I see the world for good.
What does a dedicated writer do in her spare time for fun?
Drink wine, eat crisps and actually talk to people in the flesh. Even her own children sometimes!
If you weren’t a writer what would your dream occupation be?
I’d love to be a top antique dealer. I did have a go at it once, but after 9/11 the market collapsed and never really recovered. It’s a tough business to be in these days. As is publishing!
If a film was made of your life, who would you like to play you and why?
Christina Hendricks because she’s absolutely stunningly feminine. There’d have to be a fair bit of artistic licence,mind, my curves aren’t quite the same as hers!
All that’s left to say is thank you Rachel for taking the time to answer these questions. I very much appreciate it and have really enjoyed your answers. I wish you well with the second novel and can’t wait to read it.
Rachel can be found on twitter and Facebook as well as her blog and her book Storms Heart on Amazon.